On the Relations of Man to the Lower Animals 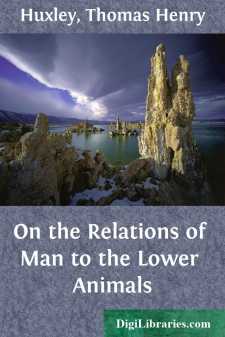 THE question of questions for mankind—the problem which underlies all others, and is more deeply interesting than any other—is the ascertainment of the place which Man occupies in nature and of his relations to the universe of things. Whence our race has come; what are the limits of our power over nature, and of nature's power over us; to what goal we are tending; are the problems which present themselves anew and with undiminished interest to every man born into the world. Most of us, shrinking from the difficulties and dangers which beset the seeker after original answers to these riddles, are contented to ignore them altogether, or to smother the investigating spirit under the featherbed of respected and respectable tradition. But, in every age, one or two restless spirits, blessed with that constructive genius, which can only build on a secure foundation, or cursed with the spirit of mere scepticism, are unable to follow in the well-worn and comfortable track of their forefathers and contemporaries, and unmindful of thorns and stumbling-blocks, strike out into paths of their own. The sceptics end in the infidelity which asserts the problem to be insoluble, or in the atheism which denies the existence of any orderly progress and governance of things: the men of genius propound solutions which grow into systems of Theology or of Philosophy, or veiled in musical language which suggests more than it asserts, take the shape of the Poetry of an epoch.

Each such answer to the great question, invariably asserted by the followers of its propounder, if not by himself, to be complete and final, remains in high authority and esteem, it may be for one century, or it may be for twenty: but, as invariably, Time proves each reply to have been a mere approximation to the truth—tolerable chiefly on account of the ignorance of those by whom it was accepted, and wholly intolerable when tested by the larger knowledge of their successors.

In a well-worn metaphor, a parallel is drawn between the life of man and the metamorphosis of the caterpillar into the butterfly; but the comparison may be more just as well as more novel, if for its former term we take the mental progress of the race. History shows that the human mind, fed by constant accessions of knowledge, periodically grows too large for its theoretical coverings, and bursts them asunder to appear in new habiliments, as the feeding and growing grub, at intervals, casts its too narrow skin and assumes another, itself but temporary. Truly the imago state of Man seems to be terribly distant, but every moult is a step gained, and of such there have been many.

Since the revival of learning, whereby the Western races of Europe were enabled to enter upon that progress towards true knowledge, which was commenced by the philosophers of Greece, but was almost arrested in subsequent long ages of intellectual stagnation, or, at most, gyration, the human larva has been feeding vigorously, and moulting in proportion. A skin of some dimension was cast in the 16th century, and another towards the end of the 18th, while, within the last fifty years, the extraordinary growth of every department of physical science has spread among us mental food of so nutritious and stimulating a character that a new ecdysis seems imminent. But this is a process not unusually accompanied by many throes and some sickness and debility, or, it may be, by graver disturbances; so that every good citizen must feel bound to facilitate the process, and even if he have nothing but a scalpel to work withal, to ease the cracking integument to the best of his ability.

In this duty lies my excuse for the publication of these essays. For it will be admitted that some knowledge of man's position in the animate world is an indispensable preliminary to the proper understanding of his relations to the universe—and this again resolves itself, in the long run, into an inquiry into the nature and the closeness of the ties which connect him with those singular creatures whose history has been sketched in the preceding pages.

The importance of such an inquiry is indeed intuitively manifest Brought face to face with these blurred copies of himself, the least thoughtful of men is conscious of a certain shock, due perhaps, not so much to disgust at the aspect of what looks like an insulting caricature, as to the awakening of a sudden and profound mistrust of time-honoured theories and strongly-rooted prejudices regarding his own position in nature, and his relations to the under-world of life; while that which remains a dim suspicion for the unthinking, becomes a vast argument, fraught with the deepest consequences, for all who are acquainted with the recent progress of the anatomical and physiological sciences....