On the Reception of the 'Origin of Species' 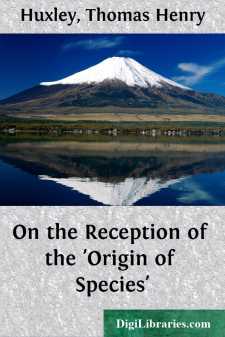 ON THE RECEPTION OF THE 'ORIGIN OF SPECIES.'

To the present generation, that is to say, the people a few years on the hither and thither side of thirty, the name of Charles Darwin stands alongside of those of Isaac Newton and Michael Faraday; and, like them, calls up the grand ideal of a searcher after truth and interpreter of Nature. They think of him who bore it as a rare combination of genius, industry, and unswerving veracity, who earned his place among the most famous men of the age by sheer native power, in the teeth of a gale of popular prejudice, and uncheered by a sign of favour or appreciation from the official fountains of honour; as one who in spite of an acute sensitiveness to praise and blame, and notwithstanding provocations which might have excused any outbreak, kept himself clear of all envy, hatred, and malice, nor dealt otherwise than fairly and justly with the unfairness and injustice which was showered upon him; while, to the end of his days, he was ready to listen with patience and respect to the most insignificant of reasonable objectors.

And with respect to that theory of the origin of the forms of life peopling our globe, with which Darwin's name is bound up as closely as that of Newton with the theory of gravitation, nothing seems to be further from the mind of the present generation than any attempt to smother it with ridicule or to crush it by vehemence of denunciation. "The struggle for existence," and "Natural selection," have become household words and every-day conceptions. The reality and the importance of the natural processes on which Darwin founds his deductions are no more doubted than those of growth and multiplication; and, whether the full potency attributed to them is admitted or not, no one doubts their vast and far-reaching significance. Wherever the biological sciences are studied, the 'Origin of Species' lights the paths of the investigator; wherever they are taught it permeates the course of instruction. Nor has the influence of Darwinian ideas been less profound, beyond the realms of Biology. The oldest of all philosophies, that of Evolution, was bound hand and foot and cast into utter darkness during the millennium of theological scholasticism. But Darwin poured new life-blood into the ancient frame; the bonds burst, and the revivified thought of ancient Greece has proved itself to be a more adequate expression of the universal order of things than any of the schemes which have been accepted by the credulity and welcomed by the superstition of seventy later generations of men.

To any one who studies the signs of the times, the emergence of the philosophy of Evolution, in the attitude of claimant to the throne of the world of thought, from the limbo of hated and, as many hoped, forgotten things, is the most portentous event of the nineteenth century. But the most effective weapons of the modern champions of Evolution were fabricated by Darwin; and the 'Origin of Species' has enlisted a formidable body of combatants, trained in the severe school of Physical Science, whose ears might have long remained deaf to the speculations of a priori philosophers....