On the Decay of the Art of Lying 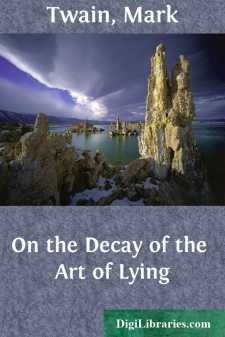 Observe, I do not mean to suggest that the custom of lying has suffered any decay or interruption—no, for the Lie, as a Virtue, A Principle, is eternal; the Lie, as a recreation, a solace, a refuge in time of need, the fourth Grace, the tenth Muse, man's best and surest friend, is immortal, and cannot perish from the earth while this club remains. My complaint simply concerns the decay of the art of lying. No high-minded man, no man of right feeling, can contemplate the lumbering and slovenly lying of the present day without grieving to see a noble art so prostituted. In this veteran presence I naturally enter upon this theme with diffidence; it is like an old maid trying to teach nursery matters to the mothers in Israel. It would not become to me to criticise you, gentlemen—who are nearly all my elders—and my superiors, in this thing—if I should here and there seem to do it, I trust it will in most cases be more in a spirit of admiration than fault-finding; indeed if this finest of the fine arts had everywhere received the attention, the encouragement, and conscientious practice and development which this club has devoted to it, I should not need to utter this lament, or shred a single tear. I do not say this to flatter: I say it in a spirit of just and appreciative recognition. [It had been my intention, at this point, to mention names and to give illustrative specimens, but indications observable about me admonished me to beware of the particulars and confine myself to generalities.]

No fact is more firmly established than that lying is a necessity of our circumstances—the deduction that it is then a Virtue goes without saying. No virtue can reach its highest usefulness without careful and diligent cultivation—therefore, it goes without saying that this one ought to be taught in the public schools—even in the newspapers. What chance has the ignorant uncultivated liar against the educated expert? What chance have I against Mr. Per—against a lawyer? Judicious lying is what the world needs. I sometimes think it were even better and safer not to lie at all than to lie injudiciously. An awkward, unscientific lie is often as ineffectual as the truth.

Now let us see what the philosophers say. Note that venerable proverb: Children and fools always speak the truth. The deduction is plain —adults and wise persons never speak it. Parkman, the historian, says, "The principle of truth may itself be carried into an absurdity." In another place in the same chapters he says, "The saying is old that truth should not be spoken at all times; and those whom a sick conscience worries into habitual violation of the maxim are imbeciles and nuisances." It is strong language, but true. None of us could live with an habitual truth-teller; but thank goodness none of us has to. An habitual truth-teller is simply an impossible creature; he does not exist; he never has existed. Of course there are people who think they never lie, but it is not so—and this ignorance is one of the very things that shame our so-called civilization. Everybody lies—every day; every hour; awake; asleep; in his dreams; in his joy; in his mourning; if he keeps his tongue still, his hands, his feet, his eyes, his attitude, will convey deception—and purposely. Even in sermons—but that is a platitude.

In a far country where I once lived the ladies used to go around paying calls, under the humane and kindly pretence of wanting to see each other; and when they returned home, they would cry out with a glad voice, saying, "We made sixteen calls and found fourteen of them out" —not meaning that they found out anything important against the fourteen—no, that was only a colloquial phrase to signify that they were not at home—and their manner of saying it expressed their lively satisfaction in that fact. Now their pretence of wanting to see the fourteen—and the other two whom they had been less lucky with—was that commonest and mildest form of lying which is sufficiently described as a deflection from the truth. Is it justifiable? Most certainly. It is beautiful, it is noble; for its object is, not to reap profit, but to convey a pleasure to the sixteen. The iron-souled truth-monger would plainly manifest, or even utter the fact that he didn't want to see those people—and he would be an ass, and inflict totally unnecessary pain. And next, those ladies in that far country—but never mind, they had a thousand pleasant ways of lying, that grew out of gentle impulses, and were a credit to their intelligence and an honor to their hearts....