On Some Fossil Remains of Man 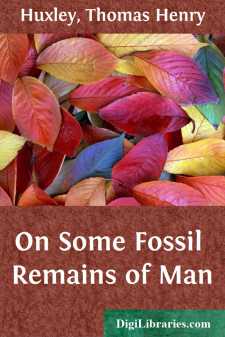 I HAVE endeavoured to show, in the preceding Essay, that the ANTHROPINI, or Man Family, form a very well defined group of the Primates, between which and the immediately following Family, the CATARHINI, there is, in the existing world, the same entire absence of any transitional form or connecting link, as between the CATARHINI and PLATYRHINI.

It is a commonly received doctrine, however, that the structural intervals between the various existing modifications of organic beings may be diminished, or even obliterated, if we take into account the long and varied succession of animals and plants which have preceded those now living and which are known to us only by their fossilized remains. How far this doctrine is well based, how far, on the other hand, as our knowledge at present stands, it is an overstatement of the real facts of the case, and an exaggeration of the conclusions fairly deducible from them, are points of grave importance, but into the discussion of which I do not, at present, propose to enter. It is enough that such a view of the relations of extinct to living beings has been propounded, to lead us to inquire, with anxiety, how far the recent discoveries of human remains in a fossil state bear out, or oppose, that view.

I shall confine myself, in discussing this question, to those fragmentary Human skulls from the caves of Engis in the valley of the Meuse, in Belgium, and of the Neanderthal near Dusseldorf, the geological relations of which have been examined with so much care by Sir Charles Lyell; upon whose high authority I shall take it for granted, that the Engis skull belonged to a contemporary of the Mammoth ('Elephas primigenius') and of the woolly Rhinoceros ('Rhinoceros tichorhinus'), with the bones of which it was found associated; and that the Neanderthal skull is of great, though uncertain, antiquity. Whatever be the geological age of the latter skull, I conceive it is quite safe (on the ordinary principles of paleontological reasoning) to assume that the former takes us to, at least, the further side of the vague biological limit, which separates the present geological epoch from that which immediately preceded it. And there can be no doubt that the physical geography of Europe has changed wonderfully, since the bones of Men and Mammoths, Hyaenas and Rhinoceroses were washed pell-mell into the cave of Engis.

The skull from the cave of Engis was originally discovered by Professor Schmerling, and was described by him, together with other human remains disinterred at the same time, in his valuable work, 'Recherches sur les ossemens fossiles decouverts dans les cavernes de la Province de Liege', published in 1833 (p. 59, 'et seq.'), from which the following paragraphs are extracted, the precise expressions of the author being, as far as possible, preserved.

"In the first place, I must remark that these human remains, which are in my possession, are characterized like thousands of bones which I have lately been disinterring, by the extent of the decomposition which they have undergone, which is precisely the same as that of the extinct species: all, with a few exceptions, are broken; some few are rounded, as is frequently found to be the case in fossil remains of other species. The fractures are vertical or oblique; none of them are eroded; their colour does not differ from that of other fossil bones, and varies from whitish yellow to blackish....