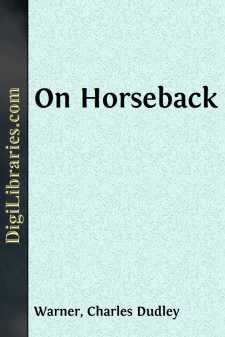 "The way to mount a horse"—said the Professor.

"If you have no ladder—put in the Friend of Humanity."

The Professor had ridden through the war for the Union on the right side, enjoying a much better view of it than if he had walked, and knew as much about a horse as a person ought to know for the sake of his character. The man who can recite the tales of the Canterbury Pilgrims, on horseback, giving the contemporary pronunciation, never missing an accent by reason of the trot, and at the same time witch North Carolina and a strip of East Tennessee with his noble horsemanship, is a kind of Literary Centaur of whose double instruction any Friend of Humanity may be glad to avail himself.

"The way to mount a horse is to grasp the mane with the left hand holding the bridle-rein, put your left foot in the stirrup, with the right hand on the back of the saddle, and—-"

Just then the horse stepped quickly around on his hind feet, and looked the Professor in the face. The Superintendents of Affairs, who occupy the flagging in front of the hotel, seated in cane-bottomed chairs tilted back, smiled. These useful persons appear to have a life-lease of this portion of the city pavement, and pretty effectually block it up nearly all day and evening. When a lady wishes to make her way through the blockade, it is the habit of these observers of life to rise and make room, touching their hats, while she picks her way through, and goes down the street with a pretty consciousness of the flutter she has caused. The war has not changed the Southern habit of sitting out-of-doors, but has added a new element of street picturesqueness in groups of colored people lounging about the corners. There appears to be more leisure than ever.

The scene of this little lesson in horsemanship was the old town of Abingdon, in southwest Virginia, on the Virginia and East Tennessee railway; a town of ancient respectability, which gave birth to the Johnstons and Floyds and other notable people; a town, that still preserves the flavor of excellent tobacco and, something of the easy-going habits of the days of slavery, and is a sort of educational center, where the young ladies of the region add the final graces of intellectual life in moral philosophy and the use of the globes to their natural gifts. The mansion of the late and left Floyd is now a seminary, and not far from it is the Stonewall Jackson Institute, in the midst of a grove of splendid oaks, whose stately boles and wide-spreading branches give a dignity to educational life. The distinction of the region is its superb oak-trees. As it was vacation in these institutions of learning, the travelers did not see any of the vines that traditionally cling to the oak.

The Professor and the Friend of Humanity were about starting on a journey, across country southward, through regions about which the people of Abingdon could give little useful information. If the travelers had known the capacities and resources of the country, they would not have started without a supply train, or the establishment of bases of provisions in advance....