On a Torn-Away World Or, the Captives of the Great Earthquake 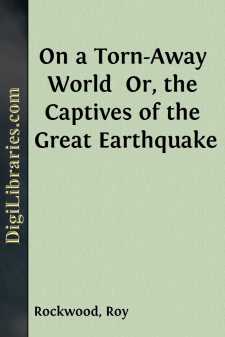 CHAPTER I SHOT INTO THE AIR

"Hurrah!" shouted Jack Darrow, flicking the final drops of lacquer from the paintbrush he had been using. "That's the last stroke. She's finished!"

"I guess we've done all we can to her before her trial trip," admitted his chum, Mark Sampson, but in a less confident tone.

"You don't see anything wrong with her, old croaker; do you?" demandedJack, laughing as usual.

"'The proof of the pudding is in the eating thereof; not in chewing the pudding bag string'," quoted Mark, still with a serious countenance.

But like Jack he stood off from the great body of the wonderful airship, and looked the completed task over with some satisfaction. Having emergency wings, she was also a plane. She was white all over and her name was the Snowbird. Jack and Mark had spent most of their time during this vacation from their college in building this flying machine, which was veritably an up-to-the-minute aerial vehicle, built for both speed and carrying capacity.

The hangar in which the machine had been built was connected with Professor Amos Henderson's laboratory and workshop, hidden away on a lonely point on the seacoast, about ten miles from the town of Easton, Maine. At this spot had been built many wonderful things—mainly the inventions of the boys' friend and protector, Professor Henderson; but the Snowbird, upon which Jack and Mark now gazed so proudly, was altogether the boys' own work.

The sliding door of the hangar opened just behind the two boys and a black face appeared.

"What did you let him out of his coop for?" demanded Mark. "You're always bothering us about that rooster, Washington. He is as elusive as the Fourth Dimension."

"I dunno wot dat fourth condension is, Massa Mark; but dat rooster is suah some conclusive. When I lets him out fo' an airin' he hikes right straight fo' some farmer's hen-yard, an' den I haster hunt fo' him."

"When you see him starting on his rambles, Wash, why don't you call him back?" demanded Jack Darrow, chuckling. "If I did, Massa Jack, I'spect he wouldn't know I was a-hollerin' fo' him."

"I don't fo' suah know wedder he does or not," returned the darkey, scratching his head "Ye see, it's a suah 'nuff longitudinous name, an' I dunno wedder he remembers it all, or not."

"He's got a bad memory; has he?" said Mark, turning to smile at Washington White, too, for Professor Henderson's old servant usually afforded the boys much amusement.

"Dunno 'bout his memory," grunted Wash; "he's gotter good forgettery, suah 'nuff. Leastways, when he starts off on one o' dese perambulationaries ob his, he fergits ter come back."

"Let's see," said Jack, nudging his chum, "what is that longitudinous' name which has been hitched onto that wonderful bird, Wash? I know it begins with the discovery of America and wanders down through the ages to the present day; but a part of it has slipped my memory—or, perhaps I should say, 'forgettery'."

With a perfectly serious face the darkey declaimed: