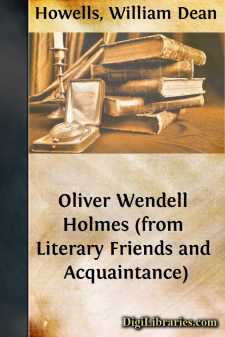 Elsewhere we literary folk are apt to be such a common lot, with tendencies here and there to be a shabby lot; we arrive from all sorts of unexpected holes and corners of the earth, remote, obscure; and at the best we do so often come up out of the ground; but at Boston we were of ascertained and noted origin, and good part of us dropped from the skies. Instead of holding horses before the doors of theatres; or capping verses at the plough-tail; or tramping over Europe with nothing but a flute in the pocket; or walking up to the metropolis with no luggage but the MS. of a tragedy; or sleeping in doorways or under the arches of bridges; or serving as apothecaries' 'prentices—we were good society from the beginning. I think this was none the worse for us, and it was vastly the better for good society.

Literature in Boston, indeed, was so respectable, and often of so high a lineage, that to be a poet was not only to be good society, but almost to be good family. If one names over the men who gave Boston her supremacy in literature during that Unitarian harvest-time of the old Puritanic seed-time which was her Augustan age, one names the people who were and who had been socially first in the city ever since the self-exile of the Tories at the time of the Revolution. To say Prescott, Motley, Parkman, Lowell, Norton, Higginson, Dana, Emerson, Channing, was to say patrician, in the truest and often the best sense, if not the largest. Boston was small, but these were of her first citizens, and their primacy, in its way, was of the same quality as that, say, of the chief families of Venice. But these names can never have the effect for the stranger that they had for one to the manner born. I say had, for I doubt whether in Boston they still mean all that they once meant, and that their equivalents meant in science, in law, in politics. The most famous, if not the greatest of all the literary men of Boston, I have not mentioned with them, for Longfellow was not of the place, though by his sympathies and relations he became of it; and I have not mentioned Oliver Wendell Holmes, because I think his name would come first into the reader's thought with the suggestion of social quality in the humanities.

Holmes was of the Brahminical caste which his humorous recognition invited from its subjectivity in the New England consciousness into the light where all could know it and own it, and like Longfellow he was allied to the patriciate of Boston by the most intimate ties of life. For a long time, for the whole first period of his work, he stood for that alone, its tastes, its prejudices, its foibles even, and when he came to stand in his 'second period, for vastly, for infinitely more, and to make friends with the whole race, as few men have ever done, it was always, I think, with a secret shiver of doubt, a backward look of longing, and an eye askance. He was himself perfectly aware of this at times, and would mark his several misgivings with a humorous sense of the situation. He was essentially too kind to be of a narrow world, too human to be finally of less than humanity, too gentle to be of the finest gentility. But such limitations as he had were in the direction I have hinted, or perhaps more than hinted; and I am by no means ready to make a mock of them, as it would be so easy to do for some reasons that he has himself suggested. To value aright the affection which the old Bostonian had for Boston one must conceive of something like the patriotism of men in the times when a man's city was a man's country, something Athenian, something Florentine. The war that nationalized us liberated this love to the whole country, but its first tenderness remained still for Boston, and I suppose a Bostonian still thinks of himself first as a Bostonian and then as an American, in a way that no New-Yorker could deal with himself....