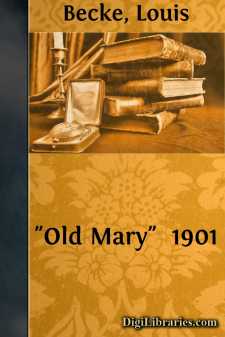 Early one morning, just as the trade wind began to lift the white mountain mist which enveloped the dark valleys and mountain slopes of the island, Denison, the supercargo of the trading schooner Palestine, put off from her side and was pulled ashore to the house of the one white trader. The man's name was Handle, and as he heard the supercargo's footstep he came to the door and bade him good morning.

"How are you, Randle?" said the young man, shaking hands with the quiet-voiced, white-haired old trader, and following him inside. "I'm going for a day's shooting while I have the chance. Can you come?"

Randle shook his head. "Would like to, but can't spare the time to-day; but Harry and the girls will be delighted to go with you. Wait a minute, and have a cup of coffee first. They'll be here presently."

Denison put down his gun and took a seat in the cool, comfortable-looking sitting-room, and in a few minutes Hester and Kate Randle and their brother came in. The two girls were both over twenty years of age. Hester, the elder, was remarkably handsome, and much resembled her father in voice and manner. Kate was of much smaller build, full of vivacity, and her big, merry brown eyes matched the dimples on her soft, sun-tanned cheeks. Harry, who was Randle's youngest child, was a heavily-built, somewhat sullen-faced youth of eighteen, and the native blood in his veins showed much more strongly than it did with his sisters. They were all pleased to see the supercargo, and at once set about making preparations, Harry getting their guns ready and the two girls packing a basket with cold food.

"You'll get any amount of pigeons about two miles from here," said the old trader, "and very likely a pig or two. The girls know the way, and if two of you take the right branch of the river and two the left you'll have some fine sport."

"Father," said the elder girl, in her pretty, halting English, as she picked up her gun, "don' you think Mr. Denison would like to see ol' Mary? We hav' been tell him so much about her. Don' you think we might stop there and let Mr. Denison have some talk with her?"

"Ay, ay, my girl. Yes; go and see the poor old thing. I'm sure she'll be delighted. You'll like her, Mr. Denison. She's as fine an old woman as ever breathed. But don't take that basket of food with you, Kate. She'd feel awfully insulted if you did not eat in her house."

The girls obeyed, much to their brother's satisfaction, inasmuch as the basket was rather heavy, and also awkward to carry through the mountain forest. In a few minutes the four started, and Hester, as she stepped out beside Denison, said that she was glad he was visiting old Mary. "You see," she said, "she hav' not good eyesight now, and so she cannot now come an' see us as she do plenty times before."

"Oh, yes," broke in Kate, "she is good and brave, an' we all love her. Every one mus' love her. She hav' known us since we were born, and when our mother died in Samoa ten years ago old Mary was jus' like a second mother to us. An' my father tried so hard to get her to come and live with us; but no, she would not, not even fo' us. So she went back to her house in the mountain, because she says she wants to die there. Ah, you will like her... and she will tell you how she saved the ship when her husband was killed, and about many, many things."

Two hours later Denison and his friends emerged out upon cultivated ground at the foot of the mountain, on which stood three or four native houses, all neatly enclosed by low stone walls formed of coral slabs....