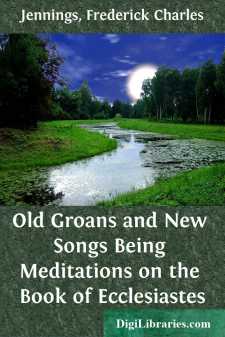 The chief object of a word of preface to the following notes is that the reader may not expect from them more, or other, than is intended. They are the result of meditations—not so much of a critical as a devotional character—on the book, in the regular course of private morning readings of the Scriptures—meditations which were jotted down at the time, and the refreshment and blessing derived from which, I desired to share with my fellow-believers. Some salient point of each chapter has been taken and used as illustrative of what is conceived as the purpose of the book. As month by month passed, however, the subject opened up to such a degree that at the end, one felt as if there were a distinct need entirely to re-write the earlier chapters. It is, however, sent forth in the same shape as originally written; the reader then may accompany the writer, and share with him the delight at the ever-new beauties in the landscape that each turn of the road, as it were, unexpectedly laid out before him.

There is one point, however, that it may be well to look at here a little more closely and carefully than has been done in the body of the book, both on account of its importance and of the strong attack that the ecclesiastical infidelity of the day has made upon it: I refer to its authorship.

To commence with the strongest position of the attack on the Solomon authorship—necessarily the strongest, for it is directly in the field of verbal criticism—it is argued that because a large number of words are found in this book, found elsewhere alone in the post-exilian writers, (as Daniel or Nehemiah,) therefore the author of the book must surely be post-exilian too. It would be unedifying, and is happily unnecessary, to review this in detail—with a literature so very limited as are the Hebrew writings cotemporary with Solomon: these few, dealing with other subjects, other ideas, necessitating therefore another character of words, it takes no scholar to see that any argument derived from this must necessarily be taken with the greatest caution. Nay, like all arguments of infidelity, it is a sword easily turned against the user. As surely as the valleys lie hid in shadow long after the mountain-tops are shining in the morning sun, so surely must we expect evidences of so elevated a personality as the wise king of Israel, to show a fuller acquaintance with the language of his neighbors; and employ, when they best suited him, words from such vocabularies—words which would not come into general use for many a long day; indeed until sorrow, captivity, and shame, had done the same work for the mass, under the chastening Hand of God, as abundant natural gifts had done for our wise and glorious author.

Thus the argument of Zöckler—"the numerous Aramaisms (words of Syriac origin) in the book are among the surest signs of its post-exile origin"—is really turned against himself. Were such Aramaisms altogether lacking, we might well question whether the writer were indeed that widely-read, eminently literary, gloriously intellectual individual of whom it is said, "his wisdom excelled the children of the East country and all the wisdom of Egypt, for he was wiser than all men." Surely, that Solomon shows he was acquainted with words other than his own Hebrew, and made use of such words when they best suited his purpose, is only what common-sense would naturally look for....