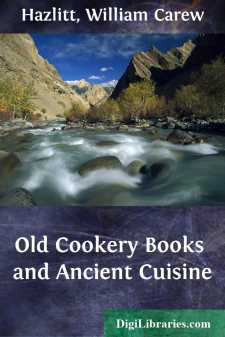 THE EARLY ENGLISHMAN AND HIS FOOD.

William of Malmesbury particularly dwells on the broad line of distinction still existing between the southern English and the folk of the more northerly districts in his day, twelve hundred years after the visit of Caesar. He says that they were then (about A.D. 1150) as different as if they had been different races; and so in fact they were—different in their origin, in their language, and their diet.

In his "Folk-lore Relics of Early Village Life," 1883, Mr. Gomme devotes a chapter to "Early Domestic Customs," and quotes Henry's "History of Great Britain" for a highly curious clue to the primitive mode of dressing food, and partaking of it, among the Britons. Among the Anglo-Saxons the choice of poultry and game was fairly wide. Alexander Neckani, in his "Treatise on Utensils (twelfth century)" gives fowls, cocks, peacocks, the cock of the wood (the woodcock, not the capercailzie), thrushes, pheasants, and several more; and pigeons were only too plentiful. The hare and the rabbit were well enough known, and with the leveret form part of an enumeration of wild animals (animalium ferarum) in a pictorial vocabulary of the fifteenth century. But in the very early accounts or lists, although they must have soon been brought into requisition, they are not specifically cited as current dishes. How far this is attributable to the alleged repugnance of the Britons to use the hare for the table, as Caesar apprises us that they kept it only voluptatis causâ, it is hard to say; but the way in which the author of the "Commentaries" puts it induces the persuasion that by lepus he means not the hare, but the rabbit, as the former would scarcely be domesticated.

Neckam gives very minute directions for the preparation of pork for the table. He appears to have considered that broiling on the grill was the best way; the gridiron had supplanted the hot stones or bricks in more fashionable households, and he recommends a brisk fire, perhaps with an eye to the skilful development of the crackling. He died without the happiness of bringing his archi-episcopal nostrils in contact with the sage and onions of wiser generations, and thinks that a little salt is enough. But, as we have before explained, Neckam prescribed for great folks. These refinements were unknown beyond the precincts of the palace and the castle.

In the ancient cookery-book, the "Menagier de Paris," 1393, which offers numerous points of similarity to our native culinary lore, the resources of the cuisine are represented as amplified by receipts for dressing hedgehogs, squirrels, magpies, and jackdaws—small deer, which the English experts did not affect, although I believe that the hedgehog is frequently used to this day by country folk, both here and abroad, and in India. It has white, rabbit-like flesh.

In an eleventh century vocabulary we meet with a tolerably rich variety of fish, of which the consumption was relatively larger in former times. The Saxons fished both with the basket and the net....