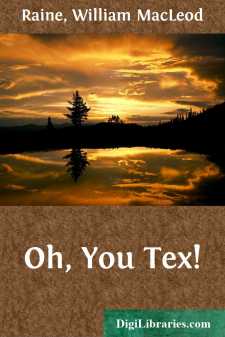 Day was breaking in the Panhandle. The line-rider finished his breakfast of buffalo-hump, coffee, and biscuits. He had eaten heartily, for it would be long after sunset before he touched food again.

Cheerfully and tunelessly he warbled a cowboy ditty as he packed his supplies and prepared to go.

"Oh, it's bacon and beans most every day,I'd as lief be eatin' prairie hay."

While he washed his dishes in the fine sand and rinsed them in the current of the creek he announced jocundly to a young world glad with spring:

"I'll sell my outfit soon as I can,Won't punch cattle for no damn' man."

The tin cup beat time against the tin plate to accompany a kind of shuffling dance. Jack Roberts was fifty miles from nowhere, alone on the desert, but the warm blood of youth set his feet to moving. Why should he not dance? He was one and twenty, stood five feet eleven in his socks, and weighed one hundred and seventy pounds of bone, sinew, and well-packed muscle. A son of blue skies and wide, wind-swept spaces, he had never been ill in his life. Wherefore the sun-kissed world looked good to him.

He mounted a horse picketed near the camp and rode out to a remuda of seven cow-ponies grazing in a draw. Of these he roped one and brought it back to camp, where he saddled it with deft swiftness.

The line-rider swung to the saddle and put his pony at a jog-trot. He topped a hill and looked across the sunlit mesas which rolled in long swells far as the eye could see. The desert flowered gayly with the purple, pink, and scarlet blossoms of the cacti and with the white, lilylike buds of the Spanish bayonet. The yucca and the prickly pear were abloom. He swept the panorama with trained eyes. In the distance a little bunch of antelope was moving down to water in single file. On a slope two miles away grazed a small herd of buffalo. No sign of human habitation was written on that vast solitude of space.

The cowboy swung to the south and held a steady road gait. With an almost uncanny accuracy he recognized all signs that had to do with cattle. Though cows, half hidden in the brush, melted into the color of the hillside, he picked them out unerringly. Brands, at a distance so great that a tenderfoot could have made of them only a blur, were plain as a primer to him.

Cows that carried on their flanks the A T O, he turned and started northward. As he returned, he would gather up these strays and drive them back to their own range. For in those days, before the barbed wire had reached Texas and crisscrossed it with boundary lines, the cowboy was a fence more mobile than the wandering stock.

It was past noon when Roberts dropped into a draw where an immense man was lying sprawled under a bush. The recumbent man was a mountain of flesh; how he ever climbed to a saddle was a miracle; how a little cow-pony carried him was another. Yet there was no better line-rider in the Panhandle than Jumbo Wilkins.

The young line-rider had won the nickname of "Texas" in New Mexico a year or two before by his aggressive championship of his native State....