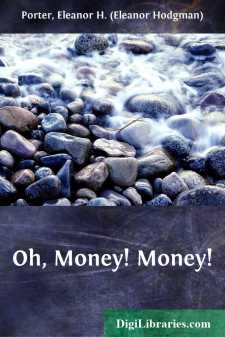 There was a thoughtful frown on the face of the man who was the possessor of twenty million dollars. He was a tall, spare man, with a fringe of reddish-brown hair encircling a bald spot. His blue eyes, fixed just now in a steady gaze upon a row of ponderous law books across the room, were friendly and benevolent in direct contradiction to the bulldog, never-let-go fighting qualities of the square jaw below the firm, rather thin lips.

The lawyer, a youthfully alert man of sixty years, trimly gray as to garb, hair, and mustache, sat idly watching him, yet with eyes that looked so intently that they seemed to listen.

For fully five minutes the two men had been pulling at their cigars in silence when the millionaire spoke.

Into the lawyer's listening eyes flashed, for a moment, the keenly scrutinizing glance usually reserved for the witness on the other side. Then quietly came the answer.

"Spend it yourself, I hope—for some years to come, Stanley."

Mr. Stanley G. Fulton was guilty of a shrug and an uplifted eyebrow.

"Thanks. Very pretty, and I appreciate it, of course. But I can't wear but one suit of clothes at a time, nor eat but one dinner—which, by the way, just now consists of somebody's health biscuit and hot water. Twenty millions don't really what you might call melt away at that rate."

"Shucks, Fulton!" he expostulated, with an irritable twist of his hand. "I thought better of you than that. This poor rich man's 'one- suit, one-dinner, one-bed-at-a-time' hard-luck story doesn't suit your style. Better cut it out!"

"All right. Cut it is." The man smiled good-humoredly. "But you see I was nettled. You didn't get me at all. I asked you what was to become of my money after I'd done spending it myself—the little that is left, of course."

Once more from the lawyer's eyes flashed that keenly scrutinizing glance.

"What was it, Fulton? A midnight rabbit, or a wedge of mince pie NOT like mother used to make? Why, man alive, you're barely over fifty, yet. Cheer up! It's only a little matter of indigestion. There are a lot of good days and good dinners coming to you, yet."

The millionaire made a wry face.

"Very likely—if I survive the biscuits. But, seriously, Ned, I'm in earnest. No, I don't think I'm going to die—yet awhile. But I ran across young Bixby last night—got him home, in fact. Delivered him to his white-faced little wife. Talk about your maudlin idiots!"

"Hm-m; well, that's what one million did—inherited. It set me to thinking—of mine, when I get through with them."

"I see." The lawyer's lips came together a little grimly. "You've not made your will, I believe."

"No. Dreaded it, somehow. Funny how a man'll fight shy of a little thing like that, isn't it? And when we're so mighty particular where it goes while we're living!"

"Yes, I know; you're not the only one. You have relatives—somewhere,I surmise."

"Nothing nearer than cousins, third or fourth, back East....