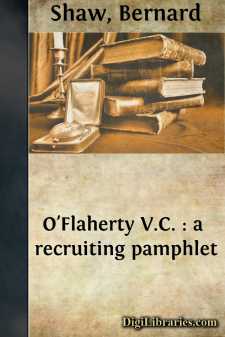 It may surprise some people to learn that in 1915 this little play was a recruiting poster in disguise. The British officer seldom likes Irish soldiers; but he always tries to have a certain proportion of them in his battalion, because, partly from a want of common sense which leads them to value their lives less than Englishmen do [lives are really less worth living in a poor country], and partly because even the most cowardly Irishman feels obliged to outdo an Englishman in bravery if possible, and at least to set a perilous pace for him, Irish soldiers give impetus to those military operations which require for their spirited execution more devilment than prudence.

Unfortunately, Irish recruiting was badly bungled in 1915. The Irish were for the most part Roman Catholics and loyal Irishmen, which means that from the English point of view they were heretics and rebels. But they were willing enough to go soldiering on the side of France and see the world outside Ireland, which is a dull place to live in. It was quite easy to enlist them by approaching them from their own point of view. But the War Office insisted on approaching them from the point of view of Dublin Castle. They were discouraged and repulsed by refusals to give commissions to Roman Catholic officers, or to allow distinct Irish units to be formed. To attract them, the walls were covered with placards headed REMEMBER BELGIUM. The folly of asking an Irishman to remember anything when you want him to fight for England was apparent to everyone outside the Castle: FORGET AND FORGIVE would have been more to the point. Remembering Belgium and its broken treaty led Irishmen to remember Limerick and its broken treaty; and the recruiting ended in a rebellion, in suppressing which the British artillery quite unnecessarily reduced the centre of Dublin to ruins, and the British commanders killed their leading prisoners of war in cold blood morning after morning with an effect of long-drawn-out ferocity. Really it was only the usual childish petulance in which John Bull does things in a week that disgrace him for a century, though he soon recovers his good humor, and cannot understand why the survivors of his wrath do not feel as jolly with him as he does with them. On the smouldering ruins of Dublin the appeals to remember Louvain were presently supplemented by a fresh appeal. IRISHMEN, DO YOU WISH TO HAVE THE HORRORS OF WAR BROUGHT TO YOUR OWN HEARTHS AND HOMES? Dublin laughed sourly.

As for me I addressed myself quite simply to the business of obtaining recruits. I knew by personal experience and observation what anyone might have inferred from the records of Irish emigration, that all an Irishman's hopes and ambitions turn on his opportunities of getting out of Ireland. Stimulate his loyalty, and he will stay in Ireland and die for her; for, incomprehensible as it seems to an Englishman, Irish patriotism does not take the form of devotion to England and England's king. Appeal to his discontent, his deadly boredom, his thwarted curiosity and desire for change and adventure, and, to escape from Ireland, he will go abroad to risk his life for France, for the Papal States, for secession in America, and even, if no better may be, for England. Knowing that the ignorance and insularity of the Irishman is a danger to himself and to his neighbors, I had no scruple in making that appeal when there was something for him to fight which the whole world had to fight unless it meant to come under the jack boot of the German version of Dublin Castle.

There was another consideration, unmentionable by the recruiting sergeants and war orators, which must nevertheless have helped them powerfully in procuring soldiers by voluntary enlistment....