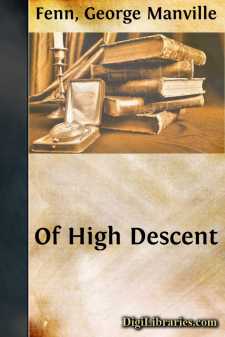 “In the West Countree.”

The thin, little, sharp-featured, grey-haired man on a rock looked sharply round, saw the big one coming, stooped, picked up a large basket, and, fishing-rod in hand, stepped back and climbed up a few feet, just as a heavy swell, which seemed to glide along rapidly over the otherwise calm sea, heaved, flooded the rock on which he had been standing, ran right up so high as to bathe his feet, then sank back in a series of glittering falls which sparkled in the glorious sunshine: there was a hissing and sighing and sucking noise among the rocks, and the wave passed on along the rugged coast, leaving the sea calm and bright once more.

“Many a poor lad’s been took like that, Mr Luke, sir,” said the speaker, “and never heard of again. Why, if I hadn’t called out, it would have took you off your legs, and the current’s so strong here you’d have been swept away.”

“And there’d been an end of me, Polly, and nobody a bit the worse, eh?”

The last speaker seemed to fill his sharp, pale face full of tiny wrinkles, and reduced his eyes to mere slits, as he looked keenly at the big robust woman at his side. She was about fifty, but with her black hair as free from grey as that of a girl, her dark eyes bright, and her sun-tanned face ruddy with health, as she bent forward with a great fish-basket supported on her back by means of a broad leather strap passed over her print sun-bonnet and across her forehead.

“Nobody the worse, Mr Luke, sir?” cried the woman. “What a shame to talk like that! You arn’t no wife, nor no child, but there’s Miss Louise.”

“Well, Louisa, sir. I only want to be right; but it was only yes’day as old Miss Vine, as stood by when I was selling her some hake, shook her finger at me and said I was to say Miss Louise.”

“Humph! Never mind what my sister says. Christened Louisa.—That ought to fetch ’em.”

“Yes, sir; that ought to fetch ’em,” said the woman in a sing-song way, as the elderly man gave the glistening bait at the end of his running line a deft swing and sent it far out into the bright sea. “I’ve seen the water boiling sometimes out there with the bass leaping and playing. What, haven’t you caught none, sir?”

“No, Polly, not one; so just be off about your business, and don’t worry me with your chatter.”

“Oh, I’m a-going, sir,” said the woman good-humouredly; “only I see you a-fishing, and said to myself, ‘Maybe Mr Luke Vine’s ketched more than he wants, and he’d like to sell me some of ’em for my customers.’”

“And I haven’t seen a bass this morning, so be off.”

“Toe be sure, Mr Luke Vine, sir; and when are you going to let me come up and give your place a good clean? I says to my ’Liza up at your brother’s, sir, only yes’day—”

“Look here, Polly Perrow,” cried the fisher viciously, “will you go, or must I?”