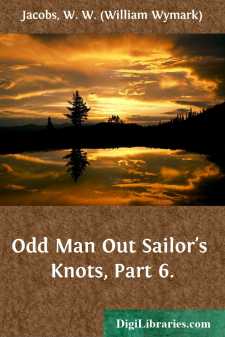 The night watchman pursed up his lips and shook his head. Friendship, he said, decidedly, is a deloosion and a snare. I've 'ad more friendships in my life than most people—owing to being took a fancy to for some reason or other—and they nearly all came to a sudden ending.

I remember one man who used to think I couldn't do wrong; everything I did was right to 'im; and now if I pass 'im in the street he makes a face as if he'd got a hair in 'is mouth. All because I told 'im the truth one day when he was thinking of getting married. Being a bit uneasy-like in his mind, he asked me 'ow, supposing I was a gal, his looks would strike me.

It was an orkard question, and I told him that he 'ad got a good 'art and that no man could 'ave a better pal. I said he 'ad got a good temper and was free with 'is money. O' course, that didn't satisfy 'im, and at last he told me to take a good look at 'im and tell him wot I thought of 'is looks. There was no getting out of it, and at last I 'ad to tell him plain that everybody 'ad diff'rent ideas about looks; that looks wasn't everything; and that 'andsome is as 'andsome does. Even then 'e wasn't satisfied, and at last I told 'im, speaking as a pal to a pal, that if I was a gal and he came along trying to court me, I should go to the police about it.

I remember two young fellers that was shipmates with me some years ago, and they was such out-and-out pals that everybody called 'em the Siamese twins. They always shipped together and shared lodgings together when they was ashore, and Ted Denver would no more 'ave thought of going out without Charlie Brice than Charlie Brice would 'ave thought of going out without 'im. They shared their baccy and their money and everything else, and it's my opinion that if they 'ad only 'ad one pair o' boots between 'em they'd 'ave hopped along in one each.

They 'ad been like it for years, and they kept it up when they left the sea and got berths ashore. Anybody knowing them would ha' thought that nothing but death could part 'em; but it happened otherwise.

There was a gal in it, of course. A gal that Ted Denver got into conversation with on top of a bus, owing to her steadying 'erself by putting her hand on 'is shoulder as she passed 'im. Bright, lively sort o' gal she seemed, and, afore Ted knew where he was, they was talking away as though they 'ad known each other for years.

Charlie didn't seem to care much for it at fust, but he didn't raise no objection; and when the gal got up to go he stopped the bus for 'er by poking the driver in the back, and they all got off together. Ted went fust to break her fall, in case the bus started off too sudden, and Charlie 'elped her down behind by catching hold of a lace collar she was wearing. When she turned to speak to 'im about it, she knocked the conductor's hat off with 'er umbrella, and there was so much unpleasantness that by the time they 'ad got to the pavement she told Charlie that she never wanted to see his silly fat face agin....