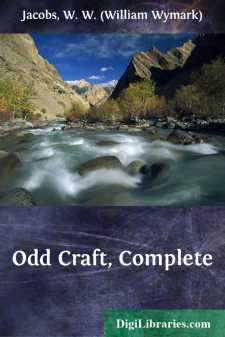 Sailormen are not good 'ands at saving money as a rule, said the night-watchman, as he wistfully toyed with a bad shilling on his watch-chain, though to 'ear 'em talk of saving when they're at sea and there isn't a pub within a thousand miles of 'em, you might think different.

It ain't for the want of trying either with some of 'em, and I've known men do all sorts o' things as soon as they was paid off, with a view to saving. I knew one man as used to keep all but a shilling or two in a belt next to 'is skin so that he couldn't get at it easy, but it was all no good. He was always running short in the most inconvenient places. I've seen 'im wriggle for five minutes right off, with a tramcar conductor standing over 'im and the other people in the tram reading their papers with one eye and watching him with the other.

Ginger Dick and Peter Russet—two men I've spoke of to you afore—tried to save their money once. They'd got so sick and tired of spending it all in p'r'aps a week or ten days arter coming ashore, and 'aving to go to sea agin sooner than they 'ad intended, that they determined some way or other to 'ave things different.

They was homeward bound on a steamer from Melbourne when they made their minds up; and Isaac Lunn, the oldest fireman aboard—a very steady old teetotaler—gave them a lot of good advice about it. They all wanted to rejoin the ship when she sailed agin, and 'e offered to take a room ashore with them and mind their money, giving 'em what 'e called a moderate amount each day.

They would ha' laughed at any other man, but they knew that old Isaac was as honest as could be and that their money would be safe with 'im, and at last, after a lot of palaver, they wrote out a paper saying as they were willing for 'im to 'ave their money and give it to 'em bit by bit, till they went to sea agin.

Anybody but Ginger Dick and Peter Russet or a fool would ha' known better than to do such a thing, but old Isaac 'ad got such a oily tongue and seemed so fair-minded about wot 'e called moderate drinking that they never thought wot they was letting themselves in for, and when they took their pay—close on sixteen pounds each—they put the odd change in their pockets and 'anded the rest over to him.

The first day they was as pleased as Punch. Old Isaac got a nice, respectable bedroom for them all, and arter they'd 'ad a few drinks they humoured 'im by 'aving a nice 'ot cup o' tea, and then goin' off with 'im to see a magic-lantern performance.

It was called "The Drunkard's Downfall," and it begun with a young man going into a nice-looking pub and being served by a nice-looking barmaid with a glass of ale. Then it got on to 'arf pints and pints in the next picture, and arter Ginger 'ad seen the lost young man put away six pints in about 'arf a minute, 'e got such a raging thirst on 'im that 'e couldn't sit still, and 'e whispered to Peter Russet to go out with 'im.

"You'll lose the best of it if you go now," ses old Isaac, in a whisper; "in the next picture there's little frogs and devils sitting on the edge of the pot as 'e goes to drink."

"Ginger Dick got up and nodded to Peter."

"Arter that 'e kills 'is mother with a razor," ses old Isaac, pleading with 'im and 'olding on to 'is coat....