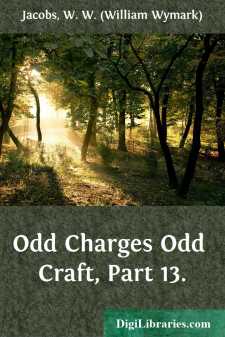 Seated at his ease in the warm tap-room of the Cauliflower, the stranger had been eating and drinking for some time, apparently unconscious of the presence of the withered ancient who, huddled up in that corner of the settle which was nearer to the fire, fidgeted restlessly with an empty mug and blew with pathetic insistence through a churchwarden pipe which had long been cold. The stranger finished his meal with a sigh of content and then, rising from his chair, crossed over to the settle and, placing his mug on the time-worn table before him, began to fill his pipe.

The old man took a spill from the table and, holding it with trembling fingers to the blaze, gave him a light. The other thanked him, and then, leaning back in his corner of the settle, watched the smoke of his pipe through half-closed eyes, and assented drowsily to the old man's remarks upon the weather.

"Bad time o' the year for going about," said the latter, "though I s'pose if you can eat and drink as much as you want it don't matter. I s'pose you mightn't be a conjurer from London, sir?"

The traveller shook his head.

"I was 'oping you might be," said the old man. The other manifested no curiosity.

"If you 'ad been," said the old man, with a sigh, "I should ha' asked you to ha' done something useful. Gin'rally speaking, conjurers do things that are no use to anyone; wot I should like to see a conjurer do would be to make this 'ere empty mug full o' beer and this empty pipe full o' shag tobacco. That's wot I should ha' made bold to ask you to do if you'd been one."

The traveller sighed, and, taking his short briar pipe from his mouth by the bowl, rapped three times upon the table with it. In a very short time a mug of ale and a paper cylinder of shag appeared on the table before the old man.

"Wot put me in mind o' your being a conjurer," said the latter, filling his pipe after a satisfying draught from the mug, "is that you're uncommon like one that come to Claybury some time back and give a performance in this very room where we're now a-sitting. So far as looks go, you might be his brother."

The traveller said that he never had a brother.

We didn't know 'e was a conjurer at fust, said the old man. He 'ad come down for Wickham Fair and, being a day or two before 'and, 'e was going to different villages round about to give performances. He came into the bar 'ere and ordered a mug o' beer, and while 'e was a-drinking of it stood talking about the weather. Then 'e asked Bill Chambers to excuse 'im for taking the liberty, and, putting his 'and to Bill's mug, took out a live frog. Bill was a very partikler man about wot 'e drunk, and I thought he'd ha' had a fit. He went on at Smith, the landlord, something shocking, and at last, for the sake o' peace and quietness, Smith gave 'im another pint to make up for it.

Bill said that 'e thought 'e knew who must ha' been asleep, and was just going to take a drink, when the conjurer asked 'im to excuse 'im agin....