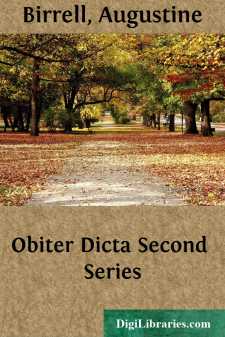 I am sorry not to have been able to persuade my old friend, George Radford, who wrote the paper on ‘Falstaff’ in the former volume, to contribute anything to the second series of Obiter Dicta.  In order to enjoy the pleasure of reading your own books over and over again, it is essential that they should be written either wholly or in part by somebody else.

Critics will probably be found ready to assert that this little book has no right to exist, since it exhibits nothing worthy of the name of research, being written by one who has never been inside the reading-room of the British Museum.  Neither does it expound any theory, save the unworthy one that literature ought to please; nor does it so much as introduce any new name or forgotten author to the attention of what is facetiously called ‘the reading public.’

But I shall be satisfied with a mere de facto existence for the book, if only it prove a little interesting to men and women who, called upon to pursue, somewhat too rigorously for their liking, their daily duties, are glad, every now and again, when their feet are on the fender, and they are surrounded by such small luxuries as their theories of life will allow them to enjoy, to be reminded of things they once knew more familiarly than now, of books they once had by heart, and of authors they must ever love.

The first two papers are here printed for the first time; the others have been so treated before, and now reappear, pulled about a little, with the kind permission of the proper parties.

It is now more than sixty years ago since Mr. Carlyle took occasion to observe, in his Life of Schiller, that, except the Newgate Calendar, there was no more sickening reading than the biographies of authors.

Allowing for the vivacity of the comparison, and only remarking, with reference to the Newgate Calendar, that its compilers have usually been very inferior wits, in fact attorneys, it must be owned that great creative and inventive genius, the most brilliant gifts of bright fancy and happy expression, and a glorious imagination, well-nigh seeming as if it must be inspired, have too often been found most unsuitably lodged in ill-living and scandalous mortals.  Though few things, even in what is called Literature, are more disgusting than to hear small critics, who earn their bite and sup by acting as the self-appointed showmen of the works of their betters, heaping terms of moral opprobrium upon those whose genius is, if not exactly a lamp unto our feet, at all events a joy to our hearts,—still, not even genius can repeal the Decalogue, or re-write the sentence of doom, ‘He which is filthy, let him be filthy still.’  It is therefore permissible to wish that some of our great authors had been better men.

It is possible to dislike John Milton.  Men have been found able to do so, and women too; amongst these latter his daughters, or one of them at least, must even be included.  But there is nothing sickening about his biography, for it is the life of one who early consecrated himself to the service of the highest Muses, who took labour and intent study as his portion, who aspired himself to be a noble poem, who, Republican though he became, is what Carlyle called him, the moral king of English literature.

Milton was born in Bread Street, Cheapside, on the 9th of December, 1608.  This is most satisfactory, though indeed what might have been expected.  There is a notable disposition nowadays, amongst the meaner-minded provincials, to carp and gird at the claims of London to be considered the mother-city of the Anglo-Saxon race, to regret her pre-eminence, and sneer at her fame.  In the matters of municipal government, gas, water, fog, and snow, much can be alleged and proved against the English capital, but in the domain of poetry, which I take to be a nation’s best guaranteed stock, it may safely be said that there are but two shrines in England whither it is necessary for the literary pilgrim to carry his cockle hat and shoon—London, the birthplace of Chaucer, Spenser, Ben Jonson, Milton, Herrick, Pope, Gray, Blake, Keats, and Browning, and Stratford-upon-Avon, the birthplace of Shakespeare.  Of English poets it may be said generally they are either born in London or remote country places.  The large provincial towns know them not.  Indeed, nothing is more pathetic than the way in which these dim, destitute places hug the memory of any puny whipster of a poet who may have been born within their statutory boundaries.  This has its advantages, for it keeps alive in certain localities fames that would otherwise have utterly perished.  Parnassus has forgotten all about poor Henry Kirke White, but the lace manufacturers of Nottingham still name him with whatever degree of reverence they may respectively consider to be the due of letters.  Manchester is yet mindful of Dr....