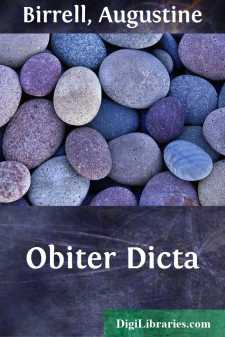 The accomplishments of our race have of late become so varied, that it is often no easy task to assign him whom we would judge to his proper station among men; and yet, until this has been done, the guns of our criticism cannot be accurately levelled, and as a consequence the greater part of our fire must remain futile. He, for example, who would essay to take account of Mr. Gladstone, must read much else besides Hansard; he must brush up his Homer, and set himself to acquire some theology. The place of Greece in the providential order of the world, and of laymen in the Church of England, must be considered, together with a host of other subjects of much apparent irrelevance to a statesman's life. So too in the case of his distinguished rival, whose death eclipsed the gaiety of politics and banished epigram from Parliament: keen must be the critical faculty which can nicely discern where the novelist ended and the statesman began in Benjamin Disraeli.

Happily, no such difficulty is now before us. Thomas Carlyle was a writer of books, and he was nothing else. Beneath this judgment he would have winced, but have remained silent, for the facts are so.

Little men sometimes, though not perhaps so often as is taken for granted, complain of their destiny, and think they have been hardly treated, in that they have been allowed to remain so undeniably small; but great men, with hardly an exception, nauseate their greatness, for not being of the particular sort they most fancy. The poet Gray was passionately fond, so his biographers tell us, of military history; but he took no Quebec. General Wolfe took Quebec, and whilst he was taking it, recorded the fact that he would sooner have written Gray's 'Elegy'; and so Carlyle—who panted for action, who hated eloquence, whose heroes were Cromwell and Wellington, Arkwright and the 'rugged Brindley,' who beheld with pride and no ignoble envy the bridge at Auldgarth his mason-father had helped to build half a century before, and then exclaimed, 'A noble craft, that of a mason; a good building will last longer than most books—than one book in a million'; who despised men of letters, and abhorred the 'reading public'; whose gospel was Silence and Action—spent his life in talking and writing; and his legacy to the world is thirty-four volumes octavo.

There is a familiar melancholy in this; but the critic has no need to grow sentimental. We must have men of thought as well as men of action: poets as much as generals; authors no less than artizans; libraries at least as much as militia; and therefore we may accept and proceed critically to examine Carlyle's thirty-four volumes, remaining somewhat indifferent to the fact that had he had the fashioning of his own destiny, we should have had at his hands blows instead of books.

Taking him, then, as he was—a man of letters—perhaps the best type of such since Dr. Johnson died in Fleet Street, what are we to say of his thirty-four volumes?

In them are to be found criticism, biography, history, politics, poetry, and religion....