Noteworthy Records of Bats From Nicaragua, with a Checklist of the Chiropteran Fauna of the Country 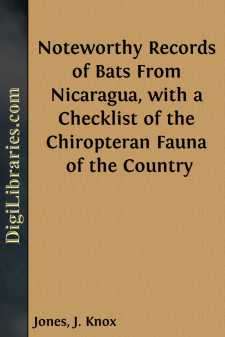 Nicaragua occupies a strategic position in Central America with respect to mammalian distributional patterns, but relatively little has been published concerning the fauna of the country and its zoogeographic relationships. The present paper records information on distribution, variation, and natural history of 40 species of bats from Nicaragua, 14 of which are here recorded for the first time from the country. Appended is a checklist of the chiropteran fauna of Nicaragua in which only primary literature with actual reference to specimens from the republic is cited.

The specimens upon which this report is based are, with few exceptions, in the collections of the Museum of Natural History of The University of Kansas. Some of our material was obtained in 1956 by J. R. and A. A. Alcorn, field representatives of the Museum and sponsored by the Kansas University Endowment Association; most of the specimens, however, were obtained by field parties of which we were members that worked in Nicaragua in 1964, 1966, 1967, and 1968 under the aegis of a contract (DA-49-193-MD-2215) between the U.S. Army Medical Research and Development Command and The University of Kansas. Place-names associated with localities mentioned in the text from which specimens at Kansas were collected are plotted on Fig. 1.

In the accounts that follow, departments in Nicaragua are listed alphabetically, but localities within each department are arranged from north to south; elevations are given in meters or feet, depending on which was used on specimen labels. All specimens are in the Museum of Natural History of The University of Kansas unless noted otherwise. We are indebted to Drs. Charles O. Handley, Jr., and Ronald Pine of the U.S. National Museum (USNM) for lending us certain critical specimens.

Two specimens from El ParaÃ­so, 1 km N Cosigüina, 20 m, Chinandega, on the Cosigüina Peninsula, provide the fourth locality of record for this white-lined bat in Nicaragua. Jones (1964a:506) and Davis et al. (1964:375) earlier reported a total of eight specimens from the departments of Managua and Zelaya. The species is known as far north in Middle America as Chiapas (Carter et al., 1966:489).

Our two bats, both females, were shot on the evening of 1 March 1968 as they foraged around a yard light. One carried an embryo that measured 8 mm (crown-rump), whereas the other was reproductively inactive.

Four females (one young and three adult) captured 5 km N and 9 km E Condega, 800 m, in Madriz, on 23 June 1964, provide the first record of this small sac-winged species from Nicaragua....