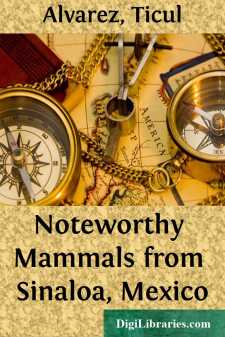 In several of the past twelve years field parties from the Museum of Natural History have collected mammals in the Mexican state of Sinaloa. Most of the collections contained only a modest number of specimens because they were made by groups that stopped for short periods on their way to or from other areas, but several collections are extensive. Field work by representatives of this institution now is underway in Sinaloa with the aim of acquiring materials suitable for treating the entire mammalian fauna of that state.

Among the mammals thus far obtained are specimens of twenty species that represent significant extensions of known range, are of especial taxonomic or zoogeographic interest, or that complement published information, and it is these records that are reported herein.

In the accounts that follow, all measurements are in millimeters and all catalogue numbers refer to the mammal collection of the Museum of Natural History, The University of Kansas. Placenames associated with specimens examined are indicated on the accompanying map ().

Notiosorex crawfordi (Coues).—A non-pregnant female (75184) was obtained on November 29, 1957, at El Fuerte by W. L. Cutter. Comparison of this specimen with topotypes of N. evotis (see below) and with undoubted examples of N. crawfordi proves our specimen to be referable to the latter. We presume that the shrew reported as evotis on geographic grounds from El Carrizo by Hooper (1961:120) also is referable to crawfordi. External measurements of our female are: total length, 77; length of tail, 20 (tip missing); length of hind foot, 11; length of ear from notch, 8; weight in grams, 4. Cranial measurements of this individual are given in .

Notiosorex evotis (Coues).—Four topotypes (85533-36), all males, were collected by Lee at Mazatlán. One was caught on December 17, 1960, in a museum special trap set "in low weeds near thorn bush" in a sandy field at the north edge of Mazatlán, less than a mile from the ocean. A few trees and some grasses grew in this area; Mus musculus and Perognathus pernix were taken in the same line of traps. Additional trapping at this locality failed to produce more shrews. The other three specimens were captured alive on February 1 (one) and February 2 (two), 1961, in the wake of a bulldozer that was clearing land adjacent to the place where the first specimen was trapped. The ground cover being cleared away consisted mostly of dry, dense weeds and short, thorny scrub; the latter was sparse in some places and formed dense thickets in others. One individual that was kept alive for a short time in a can ate crickets and roaches readily and ate one spider, but refused isopods. On one occasion it ate six crickets in about three hours....