Notes By the Way in a Sailor's Life 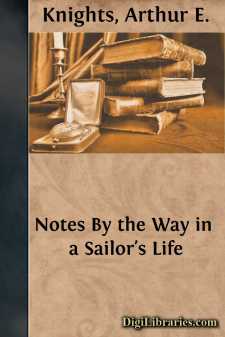 To the editor of the "China Mail."

Dear Sir:—I have just read with much pleasure the report of the quick passage made by the sailing-ship "Muskoka" from Cardiff to this port in ninety-two days. This is really a good trip and the captain and his officers may be complimented on having done so well, for, as you know, the ship is of large tonnage and the complement of men is small. I congratulate the captain and his officers, and wish they may be as successful in all their future voyages.

Mr. Editor, no doubt you remember the ship "Northfleet." I was second officer of her, as you know, in the year 1857. In the spring of that year, we loaded government stores, guns, mortars, and general war materials, with two companies of Royal Artillery, for the war at Canton, in which the French and the British were allies. We sailed from Woolwich on the river Thames, and stopped at Gravesend twelve hours, then made our final start for Hongkong, in which port we anchored in the wonderfully short time of eighty-eight days from Woolwich, which is at least three days' sail farther than Cardiff.

On the following voyage we did the same in eighty-eight days and a half. These two were record voyages made in the glorious days of "teaclippers."

First Cotton From China to America.

During the palmy days after the opening of the River Yangtse—when freights were taels 22 per ton from Hankow to Shanghai, a distance of six hundred miles—I was in command of the "Neimen," an auxiliary ship-rigged vessel, engaged in this trade until near the end of 1863, and saw some of the exciting times of the Taiping Rebellion in that part of China. By the end of 1862 the steamers "Huquang" and "Firecracker" had come from New York round the Cape of Good Hope, and later the "Chekiang," "Kiu-kiang," and other paddle steamers were put on the river, and the freights were reduced to taels 4 1/2 per ton. Then we had to clear out.

My employers ordered me to Hongkong to meet new boilers for the "Neimen." Later I received instructions to sell the "Jedda," belonging to the same owners, which was done. Then I had an offer from Mr. Paul Forbes to buy the "Neimen." This arrangement was completed, and I agreed with the new owners (Russell & Co.) to take the engines out of the vessel, and to change the rig from ship to barque, with the object of loading cotton for New York—the first from China to America. After completing our alterations, and after painting the ship in Whampoa, we came to Hongkong to load at the beginning of May, 1864. The weather and water being warm and the paint new gave a favorable opportunity for the barnacles to attach themselves to the vessel, and by the time we started the barnacles were like coarse gravel on her sides.

On the 24th of May, 1864, we sailed from Hongkong, and when we got out into the China Sea we had no monsoon, but met with a continuance of calms and squalls. The ship was unable to stand up under her canvas, having no ballast, and being, as it were, stuffed with cotton....