Not George Washington - an Autobiographical Novel 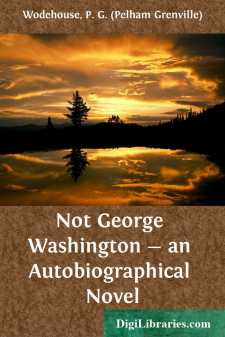 I am Margaret Goodwin. A week from today I shall be Mrs. James OrlebarCloyster.

It is just three years since I first met James. We made each other's acquaintance at half-past seven on the morning of the 28th of July in the middle of Fermain Bay, about fifty yards from the shore.

Fermain Bay is in Guernsey. My home had been with my mother for many years at St. Martin's in that island. There we two lived our uneventful lives until fate brought one whom, when first I set my eyes on him, I knew I loved.

Perhaps it is indiscreet of me to write that down. But what does it matter? It is for no one's reading but my own. James, my fiancé, is not peeping slyly over my shoulder as I write. On the contrary, my door is locked, and James is, I believe, in the smoking-room of his hotel at St. Peter's Port.

At that time it had become my habit to begin my day by rising before breakfast and taking a swim in Fermain Bay, which lies across the road in front of our cottage. The practice—I have since abandoned it—was good for the complexion, and generally healthy. I had kept it up, moreover, because I had somehow cherished an unreasonable but persistent presentiment that some day Somebody (James, as it turned out) would cross the pathway of my maiden existence. I told myself that I must be ready for him. It would never do for him to arrive, and find no one to meet him.

On the 28th of July I started off as usual. I wore a short tweed skirt, brown stockings—my ankles were, and are, good—a calico blouse, and a red tam-o'-shanter. Ponto barked at my heels. In one hand I carried my blue twill bathing-gown. In the other a miniature alpenstock. The sun had risen sufficiently to scatter the slight mist of the summer morning, and a few flecked clouds were edged with a slender frame of red gold.

Leisurely, and with my presentiment strong upon me, I descended the steep cliffside to the cave on the left of the bay, where, guarded by the faithful Ponto, I was accustomed to disrobe; and soon afterwards I came out, my dark hair over my shoulders and blue twill over a portion of the rest of me, to climb out to the point of the projecting rocks, so that I might dive gracefully and safely into the still blue water.

I was a good swimmer. I reached the ridge on the opposite side of the bay without fatigue, not changing from a powerful breast-stroke. I then sat for a while at the water's edge to rest and to drink in the thrilling glory of what my heart persisted in telling me was the morning of my life.

And then I saw Him.

Not distinctly, for he was rowing a dinghy in my direction, and consequently had his back to me.

In the stress of my emotions and an aggravation of modesty, I dived again. With an intensity like that of a captured conger I yearned to be hidden by the water. I could watch him as I swam, for, strictly speaking, he was in my way, though a little farther out to sea than I intended to go. As I drew near, I noticed that he wore an odd garment like a dressing-gown....