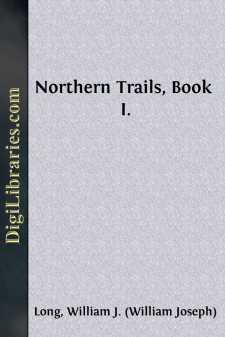 We were beating up the Straits to the Labrador when a great gale swooped down on us and drove us like a scared wild duck into a cleft in the mountains, where the breakers roared and the seals barked on the black rocks and the reefs bared their teeth on either side, like the long jaws of a wolf, to snap at us as we passed.

In our flight we had picked up a fishermanвЂ”snatched him out of his helpless punt as we luffed in a smother of spray, and dragged him aboard, like an enormous frog, at the end of the jib sheetвЂ”and it was he who now stood at the wheel of our little schooner and took her careening in through the tickle of Harbor Woe. There, in a desolate, rock-bound refuge on the Newfoundland coast, the Wild Duck swung to her anchor, veering nervously in the tide rip, tugging impatiently and clanking her chains as if eager to be out again in the turmoil. At sunset the gale blew itself out, and presently the moon wheeled full and clear over the dark mountains.

Noel, my big Indian, was curled up asleep in a caribou skin by the foremast; and the crew were all below asleep, every man glad in his heart to be once more safe in a snug harbor. All about us stretched the desolate wastes of sea and mountains, over which silence and darkness brooded, as over the first great chaos. Near at hand were the black rocks, eternally wet and smoking with the fog and gale; beyond towered the icebergs, pale, cold, glittering like spires of silver in the moonlight; far away, like a vague shadow, a handful of little gray houses clung like barnacles to the base of a great bare hill whose foot was in the sea and whose head wavered among the clouds of heaven. Not a light shone, not a sound or a sign of life came from these little houses, whose shells close daily at twilight over the life within, weary with the day's work. Only the dogs were restlessвЂ”those strange creatures that shelter in our houses and share our bread, yet live in another world, a dumb, silent, lonely world shut out from ours by impassable barriers.

For hours these uncanny dogs had puzzled me, a score of vicious, hungry brutes that drew the sledges in winter and that picked up a vagabond living in the idle summer by hunting rabbits and raiding the fishermen's flakes and pig-pens and by catching flounders in the sea as the tide ebbed. Venture among them with fear in your heart and they would fly at your legs and throat like wild beasts; but twirl a big stick jauntily, or better still go quietly on your way without concern, and they would skulk aside and watch you hungrily out of the corners of their surly eyes, whose lids were red and bloodshot as a mastiff's. When the moon rose I noticed them flitting about like witches on the lonely shore, miles away from the hamlet; now sitting on their tails in a solemn circle; now howling all together as if demented, and anon listening intently in the vast silence, as if they heard or smelled or perhaps just felt the presence of some unknown thing that was hidden from human senses....