No Surrender! A Tale of the Rising in La Vendee 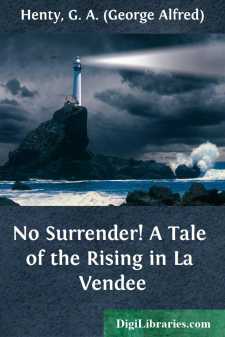 In the world's history, there is no more striking example of heroic bravery and firmness than that afforded by the people of the province of Poitou, and more especially of that portion of it known as La Vendee, in the defence of their religion and their rights as free men. At the commencement of the struggle they were almost unarmed, and the subsequent battles were fought by the aid of muskets and cannon wrested from the enemy. With the exception of its forests, La Vendee offered no natural advantages for defence. It had no mountains, such as those which enabled the Swiss to maintain their independence; no rivers which would bar the advance of an enemy; and although the woods and thickets of the Bocage, as it was called, favoured the action of the irregular troops, these do not seem to have been utilized as they might have been, the principal engagements of the war being fought on open ground. For eighteen months the peasants of La Vendee, in spite of the fact that they had no idea of submitting either to drill or discipline, repulsed the efforts of forces commanded by the best generals France could furnish; and which grew, after every defeat, until at length armies numbering, in all, over two hundred thousand men were collected to crush La Vendee.

The losses on both sides were enormous. La Vendee was almost depopulated; and the Republicans paid dearly, indeed, for their triumph, no fewer than one hundred thousand men having fallen, on their side. La Vendee was crushed, but never surrendered. Had the British government been properly informed, by its agents, of the desperate nature of the struggle that was going on; they might, by throwing twenty thousand troops, with supplies of stores and money into La Vendee, have changed the whole course of events; have crushed the Republic, given France a monarch, and thus spared Europe over twenty years of devastating warfare, the expenditure of enormous sums of money, and the loss of millions of lives.

Some half a mile back from the sea, near the point where the low line of sandy hill is broken by the entrance into Poole Harbour, stood, in 1791, Netherstock; which, with a small estate around, was the property of Squire Stansfield. The view was an extensive one, when the weather was clear. Away to the left lay the pine forests of Bournemouth and Christ Church and, still farther seaward, the cliffs of the Isle of Wight, from Totland Bay as far as Saint Catherine Point. Close at hand to the south was Studland Bay, bounded by Handfast Point. Looking towards the right was a great sheet of shallow water, for the most part dry at low tide, known as Poole and Wareham Harbours, with its numerous creeks and bays.

Netherstock was an old house, with many nooks and corners. The squire was a justice of the peace but, unless there was some special business on, he seldom took his place on the bench. He was a jovial man, who took life easily. He was popular among his neighbours, especially among the poorer classes; for whom he had always a pleasant word, as he rode along; and who, in case of illness, knew that they could always be sure of a supply of soup, or a gill of brandy at Netherstock....