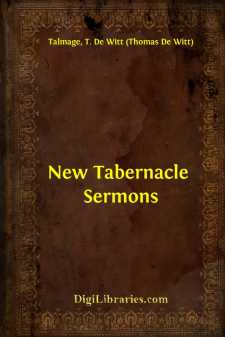 "And Samson went down to Timnath."— Judges xiv: 1.

There are two sides to the character of Samson. The one phase of his life, if followed into the particulars, would administer to the grotesque and the mirthful; but there is a phase of his character fraught with lessons of solemn and eternal import. To these graver lessons we devote our morning sermon.

This giant no doubt in early life gave evidences of what he was to be. It is almost always so. There were two Napoleons—the boy Napoleon and the man Napoleon—but both alike; two Howards—the boy Howard and the man Howard—but both alike; two Samsons—the boy Samson and the man Samson—but both alike. This giant was no doubt the hero of the playground, and nothing could stand before his exhibitions of youthful prowess. At eighteen years of age he was betrothed to the daughter of a Philistine. Going down toward Timnath, a lion came out upon him, and, although this young giant was weaponless, he seized the monster by the long mane and shook him as a hungry hound shakes a March hare, and made his bones crack, and left him by the wayside bleeding under the smiting of his fist and the grinding heft of his heel.

There he stands, looming up above other men, a mountain of flesh, his arms bunched with muscle that can lift the gate of a city, taking an attitude defiant of everything. His hair had never been cut, and it rolled down in seven great plaits over his shoulders, adding to his bulk, fierceness, and terror. The Philistines want to conquer him, and therefore they must find out where the secret of his strength lies.

But after awhile she persuades him to tell the truth....