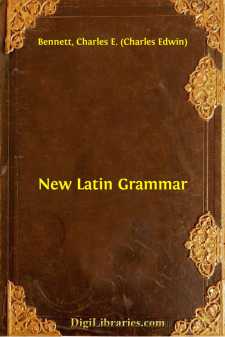 1. The Latin Alphabet is the same as the English, except that the Latin has no w.

1. K occurs only in Kalendae and a few other words; y and z were introduced from the Greek about 50 B.C., and occur only in foreign words—chiefly Greek.

2. With the Romans, who regularly employed only capitals, I served both as vowel and consonant; so also V. For us, however, it is more convenient to distinguish the vowel and consonant sounds, and to write i and u for the former, j and v for the latter. Yet some scholars prefer to employ i and u in the function of consonants as well as vowels.

2. Consonants are further subdivided into Mutes, Liquids, Nasals, and Spirants.

a) p, t, c, k, q are voiceless, i.e. sounded without voice or vibration of the vocal cords.

b) b, d, g are voiced, i.e. sounded with vibration of the vocal cords.

c) ph, th, ch are aspirates. These are confined almost exclusively to words derived from the Greek, and were equivalent to p + h, t + h, c + h, i.e. to the corresponding voiceless mutes with a following breath, as in Eng. loop-hole, hot-house, block-house.

4. The Mutes admit of classification also as

5. The Liquids are l, r. These sounds were voiced.

6. The Nasals are m, n. These were voiced. Besides its ordinary sound, n, when followed by a guttural mute also had another sound,—that of ng in sing,—the so-called n adulterГ„В«num; as,—

7. The Spirants (sometimes called Fricatives) are f, s, h. These were voiceless.

8. The Semivowels are j and v. These were voiced.

9. Double Consonants are x and z. Of these, x was equivalent to cs, while the equivalence of z is uncertain. See , 3.

10. The following table will indicate the relations of the consonant sounds:—

a. The Double Consonants, x and z, being compound sounds, do not admit of classification in the above table.

SOUNDS OF THE LETTERS.

3. The following pronunciation (often called Roman) is substantially that employed by the Romans at the height of their civilization; i.e., roughly, from 50 B.C. to 50 A.D.

ae like ai in aisle;oe like oi in oil;ei as in rein;au like ow in how; eu with its two elements, Г„вЂў and Г…­, pronounced in rapid succession;ui occurs almost exclusively in cui and huic....
Show more
Show less