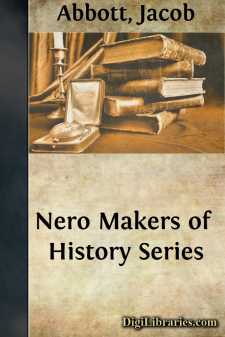 In ancient times, when the city of Rome was at the height of its power and splendor, it was the custom, as it is in fact now with the inhabitants of wealthy capitals, for the principal families to possess, in addition to their city residences, rural villas for summer retreats, which they built in picturesque situations, at a little distance from the city, sometimes in the interior of the country, and sometimes upon the sea-shore. There were many attractive places of resort of this nature in the neighborhood of Rome. Among them was Antium.

Antium.Situation of the promontory of Antium.

Antium was situated on the sea-coast about thirty miles south of the Tiber. A bold promontory here projects into the sea, affording from its declivities the most extended and magnificent views on every side. On the north, looking from the promontory of Antium, the eye follows the line of the coast away to the mouth of the Tiber; while, on the south, the view is terminated, at about the same distance, by the promontory of Circe, which is the second cape, or promontory, that marks the shore of Italy in going southward from Rome. Toward the interior, from Antium, there extends a broad and beautiful plain, bounded by wooded hills toward the shore, and by ranges of mountains in the distance beyond. On the southern side of the cape, and sheltered by it, was a small harbor where vessels from all the neighboring seas had been accustomed to bring in their cargoes, or to seek shelter in storms, from time immemorial. In fact, Antium, in point of antiquity, takes precedence, probably, even of Rome.

The beauty and the salubrity of Antium made it a very attractive place of summer resort for the people of Rome; and in process of time, when the city attained to an advanced stage of opulence and luxury, the Roman noblemen built villas there, choosing situations, in some instances, upon the natural terraces and esplanades of the promontory, which looked off over the sea, and in others cool and secluded retreats in the valleys, on the land. It was in one of these villas that Nero was born.

Nero's father belonged to a family which had enjoyed for several generations a considerable degree of distinction among the Roman nobility, though known by a somewhat whimsical name. The family name was Brazenbeard, or, to speak more exactly, it was Ahenobarbus, which is the Latin equivalent for that word. It is a question somewhat difficult to decide, whether in speaking of Nero's father at the present time, and in the English tongue, we should make use of the actual Latin name, or translate the word and employ the English representative of it; that is, whether we shall call him Ahenobarbus or Brazenbeard. The former seems to be more in harmony with our ideas of the dignity of Roman history; while the latter, though less elegant, conveys probably to our minds a more exact idea of the import and expression of the name as it sounded in the ears of the Roman community....