Natural Law in the Spiritual World 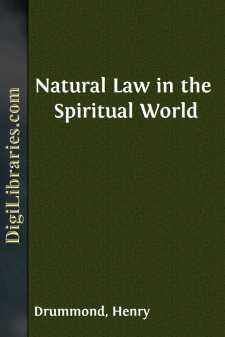 No class of works is received with more suspicion, I had almost said derision, than those which deal with Science and Religion. Science is tired of reconciliations between two things which never should have been contrasted; Religion is offended by the patronage of an ally which it professes not to need; and the critics have rightly discovered that, in most cases where Science is either pitted against Religion or fused with it, there is some fatal misconception to begin with as to the scope and province of either. But although no initial protest, probably, will save this work from the unhappy reputation of its class, the thoughtful mind will perceive that the fact of its subject-matter being Law—a property peculiar neither to Science nor to Religion—at once places it on a somewhat different footing.

The real problem I have set myself may be stated in a sentence. Is there not reason to believe that many of the Laws of the Spiritual World, hitherto regarded as occupying an entirely separate province, are simply the Laws of the Natural World? Can we identify the Natural Laws, or any one of them, in the Spiritual sphere? That vague lines everywhere run through the Spiritual World is already beginning to be recognized. Is it possible to link them with those great lines running through the visible universe which we call the Natural Laws, or are they fundamentally distinct? In a word, Is the Supernatural natural or unnatural?

I may, perhaps, be allowed to answer these questions in the form in which they have answered themselves to myself. And I must apologize at the outset for personal references which, but for the clearness they may lend to the statement, I would surely avoid.

It has been my privilege for some years to address regularly two very different audiences on two very different themes. On week days I have lectured to a class of students on the Natural Sciences, and on Sundays to an audience consisting for the most part of working men on subjects of a moral and religious character. I cannot say that this collocation ever appeared as a difficulty to myself, but to certain of my friends it was more than a problem. It was solved to me, however, at first, by what then seemed the necessities of the case—I must keep the two departments entirely by themselves. They lay at opposite poles of thought; and for a time I succeeded in keeping the Science and the Religion shut off from one another in two separate compartments of my mind. But gradually the wall of partition showed symptoms of giving way. The two fountains of knowledge also slowly began to overflow, and finally their waters met and mingled. The great change was in the compartment which held the Religion. It was not that the well there was dried; still less that the fermenting waters were washed away by the flood of Science. The actual contents remained the same. But the crystals of former doctrine were dissolved; and as they precipitated themselves once more in definite forms, I observed that the Crystalline System was changed....