Narrative of Services in the Liberation of Chili, Peru and Brazil, from Spanish and Portuguese Domination, Volume 2 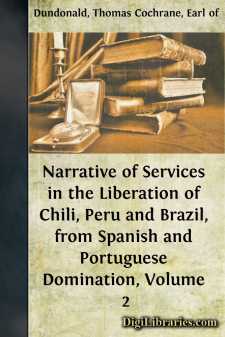 Although these memoirs relate to personal services in Brazil, it is nevertheless essential, in order to their comprehension, briefly to recapitulate a few events which more immediately led to my connection with the cause of independence in that country.

The expulsion of the Portuguese Royal Family from Lisbon, in consequence of the occupation of Portugal by the armies of the French Republic, was followed by the accession of Don John VI. to the throne of Portugal whilst resident in Rio de Janeiro.

Twelve months previous to my arrival in Brazil, His Majesty returned to Portugal, leaving his son and heir-apparent, Don Pedro, regent of the Portuguese possessions in South America, which had been for some time in a state of disaffection, arising from a growing desire throughout the various provinces for a distinct nationality. Hence two opposing interests had arisen,—a Brazilian party, which had for its object national independence; and a Portuguese party, whose aim was to prevent separation from the mother country—or, if this could not be accomplished, so to paralyse the efforts of the Brazilians, that in case of revolt it might not be difficult for Portugal to keep in subjection, at least the Northern portion of her South American Colonies. It will be necessary, in the course of the narrative, to bear these party distinctions clearly in mind.

As the Regent, Don Pedro, was supposed to evince a leaning to the Brazilian party, he gave proportionate offence to the Portuguese faction, which—though inferior in number, was, from its wealth and position, superior in influence; hence the Regent found himself involved in disputes with the latter, which in June 1821 compelled him to submit to some humiliations.

Shortly previous to this, the Cortes at Lisbon—aware of what was going on in Brazil, and disregarding the temperate views of the King—issued a declaration inviting the Brazilian municipalities to repudiate the Regent's authority at Rio de Janeiro, and to adhere to the immediate administration of the Cortes alone—thus indicating a course to be pursued by the Portuguese faction in Brazil. The result was—as had been anticipated—disunion amongst the people, consequent on the formation of petty provincial governments; each refusing to pay revenue to the central Government at Rio de Janeiro, for the alleged reason that the Regent was only waiting an opportunity to invest himself with absolute power....