Narrative of Services in the Liberation of Chili, Peru and Brazil, from Spanish and Portuguese Domination, Volume 1 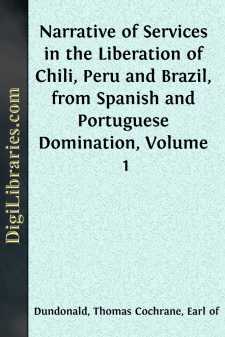 In the year 1817, Don Jose Alvarez, accredited agent of the government of Chili—as yet unacknowledged by European powers—applied to me to undertake the organization of a naval force in that country, capable of contending against the Spaniards; who, notwithstanding the successful revolt of the Chilenos by land, still maintained their predominance on the waters of the Pacific.

Having at that time no professional employment, in consequence of my unjust expulsion from the British naval service, by the machinations of the powerful political party which I had offended—and finding that Chili was making great efforts to create a navy, in furtherance of which object a war steamer had been placed on the stocks in London—I accepted the invitation, engaging to superintend her building and equipment, and to take her to Valparaiso when completed.

Meanwhile, Alvarez received orders from his Government, that, if his proposals had been accepted, no time must be lost in my departure, as the position of Chili was critical, the Spaniards threatening Valparaiso by sea, and being still in possession of the continent from Conception to Chiloe, where they were organizing the savage Indian tribes to carry desolation into the newly emancipated provinces. Reliable information had also been received, that the Court of Madrid was making strenuous efforts to recover its lost possessions by a powerful reinforcement to its Pacific squadron, against which the Chileno ships of war, in their present state, were not in a condition to contend.

Alvarez therefore begged me not to wait for the steamer, the completion and equipment of which he would hasten, but at once to sail for Chili in the Rose merchantman, then on the eve of departure. Knowing that the whole of Peru was in the hands of the Spaniards, and that they were also in possession of Valdivia, the strongest fortified harbour to the southward—from both of which there would be considerable difficulty in dislodging them after the arrival of the anticipated reinforcements—I embarked without delay; and on the 28th of November, 1818, landed at Valparaiso, accompanied by Lady Cochrane and our two children.

Our reception, both from the authorities and the people, was enthusiastic, the Supreme Director, General O'Higgins, coming from the seat of Government, Santiago, to welcome us. This excellent man was the son of an Irish gentleman of distinction in the Spanish service, who had occupied the important position of Viceroy of Peru. The son had, however, joined the patriots, and whilst second in command had not long before inflicted a signal defeat upon the Spaniards in the interior; in reward for which service the gratitude of the nation had elevated him to the Supreme Directorate....