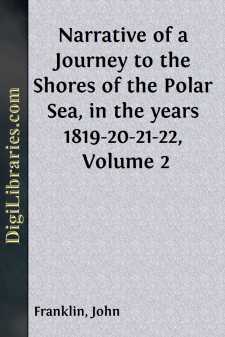 During our little expedition to the Copper-Mine River, Mr. Wentzel had made great progress in the erection of our winter-house, having nearly roofed it in. But before proceeding to give an account of a ten months' residence at this place, henceforth designated Fort Enterprise, I may premise, that I shall omit many of the ordinary occurrences of a North American winter, as they have been already detailed in so able and interesting a manner by Ellis, and confine myself principally to the circumstances which had an influence on our progress in the ensuing summer. The observations on the magnetic needle, the temperature of the atmosphere, the Aurora Borealis, and other meteorological phenomena, together with the mineralogical and botanical notices, being less interesting to the general reader, are omitted in this edition.

Voyage to Hudson's Bay in the Dobbs and California.

The men continued to work diligently at the house, and by the 30th of September had nearly completed it for our reception, when a heavy fall of rain washed the greater part of the mud off the roof. This rain was remarked by the Indians as unusual, after what they had deemed so decided a commencement of winter in the early part of the month. The mean temperature for the month was 33-3/4°, but the thermometer had sunk as low as 16°, and on one occasion rose to 53°.

Besides the party constantly employed at the house, two men were appointed to fish, and others were occasionally sent for meat, as the hunters procured it. This latter employment, although extremely laborious, was always relished by the Canadians, as they never failed to use a prescriptive right of helping themselves to the fattest and most delicate parts of the deer. Towards the end of the month, the rein-deer began to quit the barren grounds, and came into the vicinity of the house, on their way to the woods; and the success of the hunters being consequently great, the necessity of sending for the meat considerably retarded the building of the house. In the mean time we resided in our canvas tents, which proved very cold habitations, although we maintained a fire in front of them, and also endeavoured to protect ourselves from the piercing winds by a barricade of pine branches.

On the 6th of October, the house being completed, we struck our tents, and removed into it. It was merely a log-building, fifty feet long, and twenty-four wide, divided into a hall, three bed rooms and a kitchen. The walls and roof were plastered with clay, the floors laid with planks rudely squared with the hatchet, and the windows closed with parchment of deer-skin. The clay, which from the coldness of the weather, required to be tempered before the fire with hot water, froze as it was daubed on, and afterwards cracked in such a manner as to admit the wind from every quarter; yet, compared with the tents, our new habitation appeared comfortable; and having filled our capacious clay-built chimney with fagots, we spent a cheerful evening before the invigorating blaze....