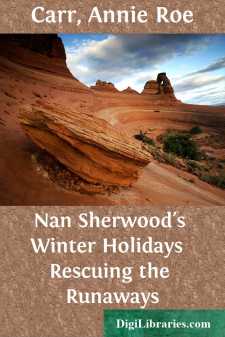 CHAPTER I DOWN PENDRAGON HILL

Professor Krenner took the silver bugle from his lips while the strain echoed flatly from the opposite, wooded hill. That hill was the Isle of Hope, a small island of a single eminence lying half a mile off the mainland, and not far north of Freeling.

The shore of Lake Huron was sheathed in ice. It was almost Christmas time. Winter had for some weeks held this part of Michigan in an iron grip. The girls of Lakeview Hall were tasting all the joys of winter sports.

The cove at the boathouse (this was the building that some of the Lakeview Hall girls had once believed haunted) was now a smooth, well-scraped skating pond. Between the foot of the hill, on the brow of which the professor stood, and the Isle of Hope, the strait was likewise solidly frozen. The bobsled course was down the hill and across the icy track to the shore of the island.

Again the professor of mathematics—and architectural drawing—put the key-bugle to his lips and sent the blast echoing over the white waste:

The road from Lakeview Hall was winding, and only a short stretch of it could be seen from the brow of Pendragon Hill. But the roof and chimneys of the great castle-like Hall were visible above the tree-tops.

Now voices were audible—laughing, sweet, clear, girls' voices, ringing like a chime of silver bells, as the owners came along the well-beaten path, and suddenly appeared around an arbor-vitae clump.

"Here they are!" announced the professor, whose red and white toboggan-cap looked very jaunty, indeed. He told of the girls' arrival to a boy who was toiling up the edge of the packed and icy slide. Walter Mason had been to the bottom of the hill to make sure that no obstacle had fallen upon the track since the previous day.

"Walter! Hello, Walter!" was the chorused shout of the leading group of girls, as the boy reached the elevation where the professor stood.

One of the girls ran to meet him, her cheeks aglow, her lips smiling, and her brown eyes dancing. She looked so much like the boy that there could be no doubt of their relationship.

"Hello, Grace!" Walter called to his sister, in response.

But his gaze went past the chubby figure of his shy sister to another girl who, with her chum, was in the lead of the four tugging at the rope of the gaily painted bobsled. This particular girl's bright and animated countenance smiled back at Walter cordially, and she waved a mittened hand.

The others he welcomed with a genial hail. Bess Harley, who toiled along beside her chum, said with a flashing smile and an imp-light of naughtiness in either black eye:

"You and Walter Mason are just as thick as leaves on a mulberry tree, Nan Sherwood! I saw you whispering together the other day when Walter came with his cutter to take Grace for a ride. Is he going to take you for a spin behind that jolly black horse of his?"