Nala and Damayanti and Other Poems 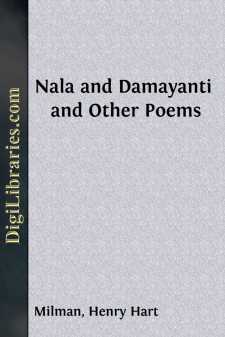 Those friends who have taken an interest in my literary productions may feel some surprise at my appearance in the character of a translator of Sanscrit poetry. To those, and indeed to all who may take up the present volume, I owe some explanation of my pretensions as a faithful interpreter of my original text. Those pretensions are very humble; and I can unfeignedly say, that if the field had been likely to be occupied by others, who might unite poetical powers with a profound knowledge of the sacred language of India, I should have withdrawn at once from the competition. But, in fact, in this country the students of oriental literature, endowed with a taste and feeling for poetry, are so few in number, that any attempt to make known the peculiar character of those remarkable works, the old mythological epics of India, may be received with indulgence by all who are interested in the history of poetry. Mr. Wilson alone, since Sir W. Jones, has united a poetical genius with deep Sanscrit scholarship; but he has in general preferred the later and more polished period—that of Kalidasa and the dramatists—to the ruder, yet in my opinion, not less curious and poetical strains of the older epic bards.

A brief account of the manner in which I became engaged in these studies, will best explain the extent of my proficiency. During the two last years in which I held the office of Professor of Poetry in the University of Oxford, having exhausted the subject which I had chosen for my terminal course, I was at a loss for some materials for the few remaining lectures before my office should expire. I had been led by the ardent curiosity, which I have ever felt to acquire some knowledge of the poetry of all ages and nations—to examine some of the publications of French and German, as well as English scholars, on the subject of Indian poetry; chiefly those of the Schlegels, of Bopp, and of De Chezy. I was struck with the singularity and captivated by the extreme beauty, as it appeared to me, of some of the extracts, especially those from the great epic poems, the Mahabharata and the Ramayana, in their Homeric simplicity so totally opposite to the ordinary notions entertained of all eastern poetry. I was induced to attempt, without any instruction, and with the few elementary works which could be procured, the Grammars of Wilkins and Bopp, the Glossaries of Bopp and Rosen (Mr. Wilson's Dictionary was then out of print and could not be purchased), to obtain some knowledge of this wonderful and mysterious language. The study grew upon me, and would have been pursued with more ardour, perhaps with more success, but for the constant interruption of more imperative professional and literary avocations. In itself the Sanscrit is an inexhaustible subject of interest; in its grammatical structure more regular, artificial, and copious than the most perfect of the western languages; in its origin, the parent from which the older Greek, the Latin and the Teutonic tongues seem to branch out and develop themselves upon distinct and discernible principles.

I ventured to communicate to the Members of the University who attended my lectures, my discoveries, as it were, in the unknown region of Indian poetry, and to introduce translations of such passages as appeared to me of peculiar singularity or beauty. Though I was still moving in the leading-strings of my learned guides, I had obtained sufficient acquaintance with the language to compare their interpretations with the original text. I afterwards embodied some parts of my lectures in an article in the Quarterly Review, in order to contribute as far as was in my power to open this new and almost untrodden field of literature to the English reader.

Still I should not have presumed to form these translations into a separate work, nor acceded to the proposal of the publisher of the present volume, who has himself deserved so well of the students of oriental lore by his excellent translation, or rather recomposition of Adelung's "Historical Sketch of Sanscrit Literature," but for the encouragement and assistance of Mr. Wilson, now, the University may be proud to say, the Boden Professor of Sanscrit at Oxford. To his most friendly care in revising these sheets, I owe the correction of many errors; and Sanscrit scholars will find in the notes some observations on the text, which will contribute to elucidate the poem of Nala. Under the sanction of Mr. Wilson's revision, I may venture to hope that the translation is, at least, an accurate version of the original; and I cannot too strongly express my gratitude for the labour which Mr....