Nagualism A Study in Native American Folk-lore and History 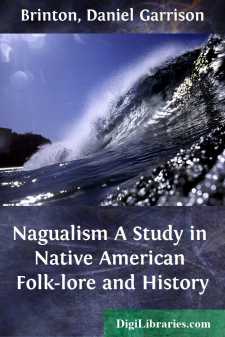 1. The words, a nagual, nagualism, a nagualist, have been current in English prose for more than seventy years; they are found during that time in a variety of books published in England and the United States, yet are not to be discovered in any dictionary of the English language; nor has Nagualism a place in any of the numerous encyclopædias or “Conversation Lexicons,” in English, French, German or Spanish.

This is not owing to its lack of importance, since for two hundred years past, as I shall show, it has been recognized as a cult, no less powerful than mysterious, which united many and diverse tribes of Mexico and Central America into organized opposition against the government and the religion which had been introduced from Europe; whose members had acquired and were bound together by strange faculties and an occult learning, which placed them on a par with the famed thaumaturgists and theodidacts of the Old World; and which preserved even into our own days the thoughts and forms of a long suppressed ritual.

In several previous publications I have referred briefly to this secret sodality and its aims, and now believe it worth while to collect my scattered notes and present all that I have found of value about the origin, aims and significance of this Eleusinian Mystery of America. I shall trace its geographical extension and endeavor to discover what its secret influence really was and is.

2. The earliest description I find of its particular rites is that which the historian Herrera gives, as they prevailed in 1530, in the province of Cerquin, in the mountainous parts of Honduras. It is as follows:

“The Devil was accustomed to deceive these natives by appearing to them in the form of a lion, tiger, coyote, lizard, snake, bird, or other animal. To these appearances they apply the name Naguales, which is as much as to say, guardians or companions; and when such an animal dies, so does the Indian to whom it was assigned. The way such an alliance was formed was thus: The Indian repaired to some very retired spot and there appealed to the streams, rocks and trees around him, and weeping, implored for himself the favors they had conferred on his ancestors. He then sacrificed a dog or a fowl, and drew blood from his tongue, or his ears, or other parts of his body, and turned to sleep. Either in his dreams or half awake, he would see some one of those animals or birds above mentioned, who would say to him, ‘On such a day go hunting and the first animal or bird you see will be my form, and I shall remain your companion and Nagual for all time.’ Thus their friendship became so close that when one died so did the other; and without such a Nagual the natives believe no one can become rich or powerful.”

This province of Cerquin appears to have been peopled by a tribe which belonged to the great Mayan stock, akin to those which occupied most of the area of what is now Yucatan, Tabasco, Chiapas and Guatemala. I shall say something later about the legendary enchantress whom their traditions recalled as the teacher of their ancestors and the founder of their nation. What I would now call attention to is the fact that in none of the dialects of the specifically Mexican or Aztecan stock of languages do we find the word nagual in the sense in which it is employed in the above extract, and this is strong evidence that the origin of Nagualism is not to be sought in that stock....