Mysticism and Logic and Other Essays 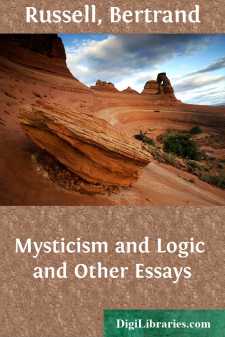 Metaphysics, or the attempt to conceive the world as a whole by means of thought, has been developed, from the first, by the union and conflict of two very different human impulses, the one urging men towards mysticism, the other urging them towards science. Some men have achieved greatness through one of these impulses alone, others through the other alone: in Hume, for example, the scientific impulse reigns quite unchecked, while in Blake a strong hostility to science co-exists with profound mystic insight. But the greatest men who have been philosophers have felt the need both of science and of mysticism: the attempt to harmonise the two was what made their life, and what always must, for all its arduous uncertainty, make philosophy, to some minds, a greater thing than either science or religion.

Before attempting an explicit characterisation of the scientific and the mystical impulses, I will illustrate them by examples from two philosophers whose greatness lies in the very intimate blending which they achieved. The two philosophers I mean are Heraclitus and Plato.

Heraclitus, as every one knows, was a believer in universal flux: time builds and destroys all things. From the few fragments that remain, it is not easy to discover how he arrived at his opinions, but there are some sayings that strongly suggest scientific observation as the source.

"The things that can be seen, heard, and learned," he says, "are what I prize the most." This is the language of the empiricist, to whom observation is the sole guarantee of truth. "The sun is new every day," is another fragment; and this opinion, in spite of its paradoxical character, is obviously inspired by scientific reflection, and no doubt seemed to him to obviate the difficulty of understanding how the sun can work its way underground from west to east during the night. Actual observation must also have suggested to him his central doctrine, that Fire is the one permanent substance, of which all visible things are passing phases. In combustion we see things change utterly, while their flame and heat rise up into the air and vanish.

"This world, which is the same for all," he says, "no one of gods or men has made; but it was ever, is now, and ever shall be, an ever-living Fire, with measures kindling, and measures going out."

"The transformations of Fire are, first of all, sea; and half of the sea is earth, half whirlwind."

This theory, though no longer one which science can accept, is nevertheless scientific in spirit. Science, too, might have inspired the famous saying to which Plato alludes: "You cannot step twice into the same rivers; for fresh waters are ever flowing in upon you." But we find also another statement among the extant fragments: "We step and do not step into the same rivers; we are and are not."

The comparison of this statement, which is mystical, with the one quoted by Plato, which is scientific, shows how intimately the two tendencies are blended in the system of Heraclitus....