My War Experiences in Two Continents 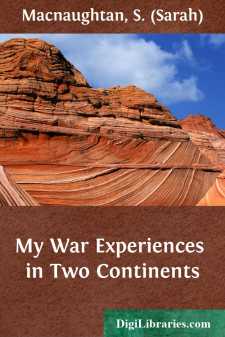 On September 20th, 1914, I left London for Antwerp. At the station I found I had forgotten my passport and Mary had to tear back for it. Great perturbation, but kept this dark from the rest of the staff, for they are all rather serious and I am head of the orderlies. We got under way at 4 a.m. next morning. All instantly began to be sick. I think I was the worst and alarmed everybody within hearing distance. One more voyage I hope—home—then dry land for me.

We arrived at Antwerp on the 22nd, twenty-four hours late. The British Consul sent carriages, etc., to meet us. Drove to the large Philharmonic Hall, which has been given us as a hospital. Immediately after breakfast we began to unpack beds, etc., and our enormous store of medical things; all feeling remarkably empty and queer, but put on heroic smiles and worked like mad. Some of the staff is housed in a convent and the rest in rooms over the Philharmonic Hall.

23 September.—Began to get things into order and to allot each person her task. Our unit consists of Mrs. St. Clair Stobart, its head; Doctors Rose Turner, F. Stoney, Watts, Morris, Hanson and Ramsey (all women); orderlies—me, Miss Randell (interpreter), Miss Perry, Dick, Stanley, Benjamin, Godfrey, Donnisthorpe, Cunliffe, and Mr. Glade. Everyone very zealous and inclined to do anybody's work except their own. Keen competition for everyone else's tools, brooms, dusters, etc. Great roaming about. All mean well.

25 September.—Forty wounded men were brought into our hospital yesterday. Fortunately we had everything ready, but it took a bit of doing. We are all dead tired, and not so keen as we were about doing other people's work.

The wounded are not very bad, and have been sent on here from another hospital. They are enchanted with their quarters, which indeed do look uncommonly nice. One hundred and thirty beds are ranged in rows, and we have a bright counterpane on each and clean sheets. The floor is scrubbed, and the bathrooms, store, office, kitchens, and receiving-rooms have been made out of nothing, and look splendid. I never saw a hospital spring up like magic in this way before. There is a wide verandah where the men play cards, and a garden to stump about in.

The gratitude of our patients is boundless, and they have presented Mrs. Stobart with a beautiful basket of growing flowers. I do not think Englishmen would have thought of such a thing. They say they never tasted such cooking as ours outside Paris, and they are rioting in good food, papers, nice beds, etc. Nearly all of them are able to get out a little, so it is quite cheery nursing them. There is a lot to do, and we all fly about in white caps. The keenest competition is for sweeping out the ward with a long-handled hair brush!

THE DEFENCES OF THE TOWN

I went into the town to-day. It is very like every other foreign town, with broad streets and tram-lines and shops and squares, but to-day I had an interesting drive. I took a car and went out to the second line of forts....