My Summer in a Garden 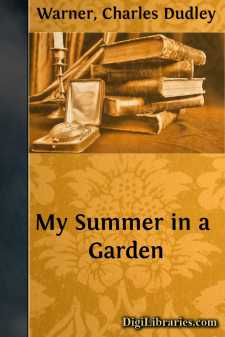 MY DEAR MR. FIELDS,—I did promise to write an Introduction to these charming papers but an Introduction,—what is it?—a sort of pilaster, put upon the face of a building for looks' sake, and usually flat,—very flat. Sometimes it may be called a caryatid, which is, as I understand it, a cruel device of architecture, representing a man or a woman, obliged to hold up upon his or her head or shoulders a structure which they did not build, and which could stand just as well without as with them. But an Introduction is more apt to be a pillar, such as one may see in Baalbec, standing up in the air all alone, with nothing on it, and with nothing for it to do.

But an Introductory Letter is different. There is in that no formality, no assumption of function, no awkward propriety or dignity to be sustained. A letter at the opening of a book may be only a footpath, leading the curious to a favorable point of observation, and then leaving them to wander as they will.

Sluggards have been sent to the ant for wisdom; but writers might better be sent to the spider, not because he works all night, and watches all day, but because he works unconsciously. He dare not even bring his work before his own eyes, but keeps it behind him, as if too much knowledge of what one is doing would spoil the delicacy and modesty of one's work.

Almost all graceful and fanciful work is born like a dream, that comes noiselessly, and tarries silently, and goes as a bubble bursts. And yet somewhere work must come in,—real, well-considered work.

Inness (the best American painter of Nature in her moods of real human feeling) once said, "No man can do anything in art, unless he has intuitions; but, between whiles, one must work hard in collecting the materials out of which intuitions are made." The truth could not be hit off better. Knowledge is the soil, and intuitions are the flowers which grow up out of it. The soil must be well enriched and worked.

It is very plain, or will be to those who read these papers, now gathered up into this book, as into a chariot for a race, that the author has long employed his eyes, his ears, and his understanding, in observing and considering the facts of Nature, and in weaving curious analogies. Being an editor of one of the oldest daily news-papers in New England, and obliged to fill its columns day after day (as the village mill is obliged to render every day so many sacks of flour or of meal to its hungry customers), it naturally occurred to him, "Why not write something which I myself, as well as my readers, shall enjoy? The market gives them facts enough; politics, lies enough; art, affectations enough; criminal news, horrors enough; fashion, more than enough of vanity upon vanity, and vexation of purse. Why should they not have some of those wandering and joyous fancies which solace my hours?"

The suggestion ripened into execution. Men and women read, and wanted more. These garden letters began to blossom every week; and many hands were glad to gather pleasure from them....