My Mark Twain (from Literary Friends and Acquaintance) 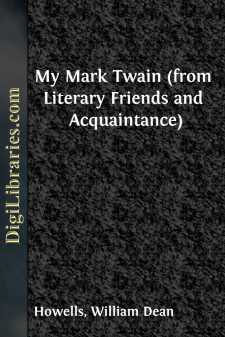 It was in the little office of James T. Fields, over the bookstore of Ticknor & Fields, at 124 Tremont Street, Boston, that I first met my friend of now forty-four years, Samuel L. Clemens. Mr. Fields was then the editor of The Atlantic Monthly, and I was his proud and glad assistant, with a pretty free hand as to manuscripts, and an unmanacled command of the book-notices at the end of the magazine. I wrote nearly all of them myself, and in 1869 I had written rather a long notice of a book just winning its way to universal favor. In this review I had intimated my reservations concerning the 'Innocents Abroad', but I had the luck, if not the sense, to recognize that it was such fun as we had not had before. I forget just what I said in praise of it, and it does not matter; it is enough that I praised it enough to satisfy the author. He now signified as much, and he stamped his gratitude into my memory with a story wonderfully allegorizing the situation, which the mock modesty of print forbids my repeating here. Throughout my long acquaintance with him his graphic touch was always allowing itself a freedom which I cannot bring my fainter pencil to illustrate. He had the Southwestern, the Lincolnian, the Elizabethan breadth of parlance, which I suppose one ought not to call coarse without calling one's self prudish; and I was often hiding away in discreet holes and corners the letters in which he had loosed his bold fancy to stoop on rank suggestion; I could not bear to burn them, and I could not, after the first reading, quite bear to look at them. I shall best give my feeling on this point by saying that in it he was Shakespearian, or if his ghost will not suffer me the word, then he was Baconian.

At the time of our first meeting, which must have been well toward the winter, Clemens (as I must call him instead of Mark Twain, which seemed always somehow to mask him from my personal sense) was wearing a sealskin coat, with the fur out, in the satisfaction of a caprice, or the love of strong effect which he was apt to indulge through life. I do not know what droll comment was in Fields's mind with respect to this garment, but probably he felt that here was an original who was not to be brought to any Bostonian book in the judgment of his vivid qualities. With his crest of dense red hair, and the wide sweep of his flaming mustache, Clemens was not discordantly clothed in that sealskin coat, which afterward, in spite of his own warmth in it, sent the cold chills through me when I once accompanied it down Broadway, and shared the immense publicity it won him. He had always a relish for personal effect, which expressed itself in the white suit of complete serge which he wore in his last years, and in the Oxford gown which he put on for every possible occasion, and said he would like to wear all the time. That was not vanity in him, but a keen feeling for costume which the severity of our modern tailoring forbids men, though it flatters women to every excess in it; yet he also enjoyed the shock, the offence, the pang which it gave the sensibilities of others. Then there were times he played these pranks for pure fun, and for the pleasure of the witness. Once I remember seeing him come into his drawing-room at Hartford in a pair of white cowskin slippers, with the hair out, and do a crippled colored uncle to the joy of all beholders. Or, I must not say all, for I remember also the dismay of Mrs. Clemens, and her low, despairing cry of, "Oh, Youth!" That was her name for him among their friends, and it fitted him as no other would, though I fancied with her it was a shrinking from his baptismal Samuel, or the vernacular Sam of his earlier companionships. He was a youth to the end of his days, the heart of a boy with the head of a sage; the heart of a good boy, or a bad boy, but always a wilful boy, and wilfulest to show himself out at every time for just the boy he was.

There is a gap in my recollections of Clemens, which I think is of a year or two, for the next thing I remember of him is meeting him at a lunch in Boston, given us by that genius of hospitality, the tragically destined Ralph Keeler, author of one of the most unjustly forgotten books, 'Vagabond Adventures', a true bit of picaresque autobiography. Keeler never had any money, to the general knowledge, and he never borrowed, and he could not have had credit at the restaurant where he invited us to feast at his expense. There was T. B. Aldrich, there was J. T. Fields, much the oldest of our company, who had just freed himself from the trammels of the publishing business, and was feeling his freedom in every word; there was Bret Harte, who had lately come East in his princely progress from California; and there was Clemens....