My Life and My Efforts

by Karl Friedrich May 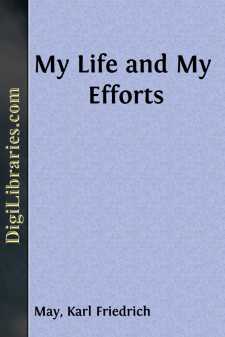 Karl May, born in 1842 under the name Carl Friedrich May, published the first volume of his autobiography in November of 1910. He never found the time to write the planned second volume or any of the other future works he is referring to in this book before he died in 1912.

Rudolf Lebius felt insulted by what Karl May had to say about him in his autobiography, and, less than one month after the sale of this book had started, Lebius succeeded in obtaining an injunction against it, so that it had to be taken out of the shops, and all remaining copies had to be destroyed. Rudolf Lebius is portrayed by Karl May as a villain of the worst kind, a man who changes his political loyalties for money and specialises in blackmailing people, after digging up dirt from their past, in order to control and use them and, most of all, in order to extort money. It is a fact that Lebius had been asking Karl May to "loan" him money, and when Karl May refused to pay, Lebius started publishing ever more aggressive articles against May in a newspaper he owned, full of exaggerated and partially false accusations. Lebius had been working for several newspapers with different political backgrounds before joining the social democratic party and writing for their newspapers. After founding his own newspaper, he left the party and changed his political views into the very opposite. Lebius then focused on anti-Semitic propaganda, and, after the first world war, he even led an anti-Semitic party for a few years. He died in 1946.

Thus, the first edition of Karl May's autobiography could only reach a few hundred people, probably mostly among German speaking readers outside of Germany, e.g. in Austria, where the injunction of the German court did not apply. About three month prior to his death, Karl May wrote to his publisher: "Concerning `My Life and My Efforts' I am willing to do your bidding. I will tackle it." Whether Karl May rewrote some parts of his autobiography, is uncertain, but very soon after his death, his publisher announced that an abridged version would soon be available. Four month after Karl May's death, this abridged version was published. It did not just omit the passages about Rudolf Lebius, but much more, and it even added texts taken from other autobiographical writings by Karl May. This adaptation is credited to Karl May's widow and E.A. Schmid (1884-1951). Little more than a month had passed before someone else, the lawyer Oskar Gerlach, felt insulted by this version and obtained an injunction against its publication. The publisher reacted by printing new, mostly blank, versions of those two pages Gerlach had objected against, instructing booksellers to rip out the offending pages and to glue the new ones in. In December of 1912, the lawsuit was settled, and the remaining copies of the adaptation could be sold with all of its pages, but a new edition would have to be changed. This third, further abridged edition was published in 1914 by E.A. Schmid. In early 1917, a 34th volume was added to the series of Karl May's collected works, of which 33 volumes had been published in the author's lifetime. This 34th volume is titled "Ich" <I>. It contains another abridged version of the autobiography as well as a few other texts, mostly about, but not by, Karl May....