My Father as I Recall Him 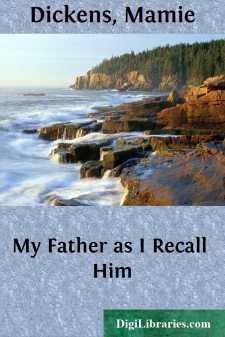 Seeing “Gad’s Hill” as a child.—His domestic side and home-love.—His love of children.—His neatness and punctuality.—At the table, and as host.—The original of “Little Nell.”

If, in these pages, written in remembrance of my father, I should tell you my dear friends, nothing new of him, I can, at least, promise you that what I shall tell will be told faithfully, if simply, and perhaps there may be some things not familiar to you.

A great many writers have taken it upon themselves to write lives of my father, to tell anecdotes of him, and to print all manner of things about him.  Of all these published books I have read but one, the only genuine “Life” thus far written of him, the one sanctioned by my father himself, namely: “The Life of Charles Dickens,” by John Forster.

But in what I write about my father I shall depend chiefly upon my own memory of him, for I wish no other or dearer remembrance.  My love for my father has never been touched or approached by any other love.  I hold him in my heart of hearts as a man apart from all other men, as one apart from all other beings.

Of my father’s childhood it is but natural that I should know very little more than the knowledge possessed by the great public.  But I never remember hearing him allude at any time, or under any circumstances, to those unhappy days in his life except in the one instance of his childish love and admiration for “Gad’s Hill,” which was destined to become so closely associated with his name and works.

He had a very strong and faithful attachment for places: Chatham, I think, being his first love in this respect.  For it was here, when a child, and a very sickly child, poor little fellow, that he found in an old spare room a store of books, among which were “Roderick Random,” “Peregrine Pickle,” “Humphrey Clinker,” “Tom Jones,” “The Vicar of Wakefield,” “Don Quixote,” “Gil Blas,” “Robinson Crusoe,” “The Arabian Nights,” and other volumes.  “They were,” as Mr. Forster wrote, “a host of friends when he had no single friend.”  And it was while living at Chatham that he first saw “Gad’s Hill.”

As a “very queer small boy” he used to walk up to the house—it stood on the summit of a high hill—on holidays, or when his heart ached for a “great treat.”  He would stand and look at it, for as a little fellow he had a wonderful liking and admiration for the house, and it was, to him, like no other house he had ever seen.  He would walk up and down before it with his father, gazing at it with delight, and the latter would tell him that perhaps if he worked hard, was industrious, and grew up to be a good man, he might some day come to live in that very house.  His love for this place went through his whole life, and was with him until his death.  He takes “Mr. Pickwick” and his friends from Rochester to Cobham by the beautiful back road, and I remember one day when we were driving that way he showed me the exact spot where “Mr. Pickwick” called out: “Whoa, I have dropped my whip!”  After his marriage he took his wife for the honeymoon to a village called Chalk, between Gravesend and Rochester....