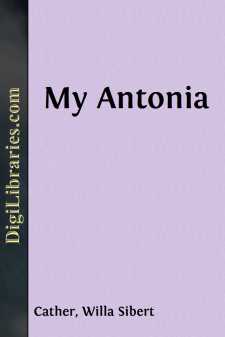 LAST summer I happened to be crossing the plains of Iowa in a season of intense heat, and it was my good fortune to have for a traveling companion James Quayle Burden—Jim Burden, as we still call him in the West. He and I are old friends—we grew up together in the same Nebraska town—and we had much to say to each other. While the train flashed through never-ending miles of ripe wheat, by country towns and bright-flowered pastures and oak groves wilting in the sun, we sat in the observation car, where the woodwork was hot to the touch and red dust lay deep over everything. The dust and heat, the burning wind, reminded us of many things. We were talking about what it is like to spend one's childhood in little towns like these, buried in wheat and corn, under stimulating extremes of climate: burning summers when the world lies green and billowy beneath a brilliant sky, when one is fairly stifled in vegetation, in the color and smell of strong weeds and heavy harvests; blustery winters with little snow, when the whole country is stripped bare and gray as sheet-iron. We agreed that no one who had not grown up in a little prairie town could know anything about it. It was a kind of freemasonry, we said.

Although Jim Burden and I both live in New York, and are old friends, I do not see much of him there. He is legal counsel for one of the great Western railways, and is sometimes away from his New York office for weeks together. That is one reason why we do not often meet. Another is that I do not like his wife.

When Jim was still an obscure young lawyer, struggling to make his way in New York, his career was suddenly advanced by a brilliant marriage. Genevieve Whitney was the only daughter of a distinguished man. Her marriage with young Burden was the subject of sharp comment at the time. It was said she had been brutally jilted by her cousin, Rutland Whitney, and that she married this unknown man from the West out of bravado. She was a restless, headstrong girl, even then, who liked to astonish her friends. Later, when I knew her, she was always doing something unexpected. She gave one of her town houses for a Suffrage headquarters, produced one of her own plays at the Princess Theater, was arrested for picketing during a garment-makers' strike, etc. I am never able to believe that she has much feeling for the causes to which she lends her name and her fleeting interest. She is handsome, energetic, executive, but to me she seems unimpressionable and temperamentally incapable of enthusiasm. Her husband's quiet tastes irritate her, I think, and she finds it worth while to play the patroness to a group of young poets and painters of advanced ideas and mediocre ability. She has her own fortune and lives her own life. For some reason, she wishes to remain Mrs. James Burden.

As for Jim, no disappointments have been severe enough to chill his naturally romantic and ardent disposition. This disposition, though it often made him seem very funny when he was a boy, has been one of the strongest elements in his success....