My Adventures as a Spy 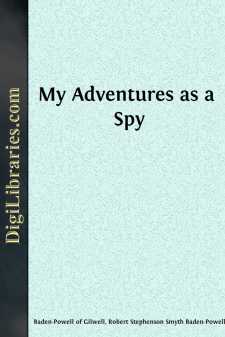 THE DIFFERENT DEGREES OF SPIES.

Let us for the moment change the term "spy" to "investigator" or "military agent." For war purposes these agents may be divided into:

1. Strategical and diplomatic agents, who study the political and military conditions in peace time of all other countries which might eventually be in opposition to their own in war. These also create political disaffection and organise outbreaks, such, for instance, as spreading sedition amongst Egyptians, or in India amongst the inhabitants, or in South Africa amongst the Boer population, to bring about an outbreak, if possible, in order to create confusion and draw off troops in time of war.

2. Tactical, military, or naval agents, who look into minor details of armament and terrain in peace time. These also make tactical preparations on the spot, such as material for extra bridges, gun emplacements, interruption of communications, etc.

3. Field spies. Those who act as scouts in disguise to reconnoitre positions and to report moves of the enemy in the field of war. Amongst these are residential spies and officer agents.

All these duties are again subdivided among agents of every grade, from ambassadors and their attachés downwards. Naval and military officers are sent to carry out special investigations by all countries, and paid detectives are stationed in likely centres to gather information.

There are also traitor spies. For these I allow I have not a good word. They are men who sell their countries' secrets for money. Fortunately we are not much troubled with them in England; but we have had a notorious example in South Africa.

The war treason—that is, preliminary political and strategical investigation—of the Germans in the present campaign has not been such a success as might have been expected from a scheme so wonderfully organised as it has been. With the vast sums spent upon it, the German General Staff might reasonably have obtained men in a higher position in life who could have gauged the political atmosphere better than was done by their agents immediately before the present crisis.

Their plans for starting strikes at a critical time met with no response whatever. They had great ideas of stirring up strife and discontent among the Mahommedan populations both in Egypt and in India, but they calculated without knowing enough of the Eastern races or their feelings towards Great Britain and Germany—more especially Germany.

They looked upon the Irish question as being a certainty for civil war in Britain, and one which would necessitate the employment of a large proportion of our expeditionary force within our own islands.

They never foresaw that the Boer and Briton would be working amicably in South Africa; they had supposed that the army of occupation there could never be removed, and did not foresee that South Africa would be sending a contingent against their South African colonies while the regulars came to strengthen our army at home.

They imagined the Overseas Dominions were too weak in men and ships and training to be of any use; and they never foresaw that the manhood of Great Britain would come forward in vast numbers to take up arms for which their national character has to a large extent given them the necessary qualifications....