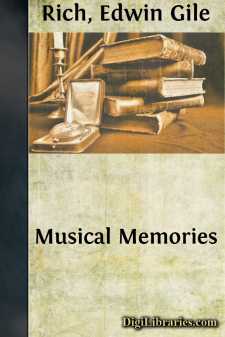 Memories of My Childhood

In bygone days I was often told that I had two mothers, and, as a matter of fact, I did have two—the mother who gave me life and my maternal great-aunt, Charlotte Masson. The latter came from an old family of lawyers named Gayard and this relationship makes me a descendant of General Delcambre, one of the heroes of the retreat from Russia. His granddaughter married Count Durrieu of the Académie des Inscriptions et Belles-Lettres. My great-aunt was born in the provinces in 1781, but she was adopted by a childless aunt and uncle who made their home in Paris. He was a wealthy lawyer and they lived magnificently.

My great-aunt was a precocious child—she walked at nine months—and she became a woman of keen intellect and brilliant attainments. She remembered perfectly the customs of the Ancien Régime, and she enjoyed telling about them, as well as about the Revolution, the Reign of Terror, and the times that followed. Her family was ruined by the Revolution and the slight, frail, young girl undertook to earn her living by giving lessons in French, on the pianoforte—the instrument was a novelty then—in singing, painting, embroidery, in fact in everything she knew and in much that she did not. If she did not know, she learned then and there so that she could teach. Afterwards, she married one of her cousins. As she had no children of her own, she brought one of her nieces from Champagne and adopted her. This niece was my mother, Clemence Collin. The Massons were about to retire from business with a comfortable fortune, when they lost practically everything within two weeks, in a panic, saving just enough to live decently. Shortly after this my mother married my father, a minor official in the Department of the Interior. My great-uncle died of a broken heart some months before my birth on October 9, 1835. My father died of consumption on the thirty-first of the following December, just a year to a day after his marriage.

Thus the two women were both left widows, poorly provided for, weighed down by sad memories, and with the care of a delicate child. In fact I was so delicate that the doctors held out little hope of my living, and on their advice I was left in the country with my nurse until I was two years old.

While my aunt had had a remarkable education, my mother had not been so widely taught. But she made up for any lack by the display of an imagination and an eager power of assimilation which bordered on the miraculous. She often told me about an uncle who was very fond of her—he had been ruined in the cause of Philippe Egalité. This uncle was an artist, but he was, nevertheless, passionately fond of music. He had even built with his own hands a concert organ on which he used to play. My mother used to sit between his knees and, while he amused himself by running his fingers through her splendid black hair, he would talk to her about art, music, painting—beauty in every form. So she got it into her head that if she ever had sons of her own, the first should be a musician, the second a painter, and the third a sculptor....