Mud and Khaki Sketches from Flanders and France 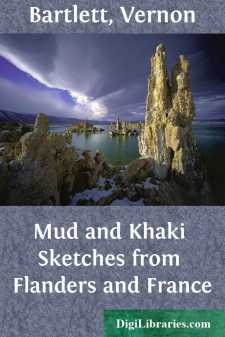 Close behind the trenches on the Ypres salient stands part of "Chapel Farm"—the rest of it has long been trampled down into the mud by the many hundreds of men who have passed by there. Enough of the ruin still stands for you to trace out the original plan of the place—a house and two barns running round three sides of the farmyard that is fœtid and foul and horrible.

It is an uninviting spot, for, close by, are the remains of a dead cow, superficially buried long ago by some working party that was in a hurry to get home; but the farm is notable for the fact that passing round the north side of the building you are out of view, and safe, and that passing round the south side you can be seen by the enemy, and are certain to be sniped.

If you must be sniped, however, you might choose a worse place, for the bullets generally fly low there, and there is a cellar to which you can be carried—a filthy spot, abounding in rats, and damp straw, and stained rags, for the place once acted as a dressing-station. But still, it is under cover, and intact, with six little steps leading up into the farmyard.

And one day, as I led a party of men down to the "dumping ground" to fetch ammunition, I was astonished to hear the familiar strains of "Gilbert the Filbert" coming from this desolate ruin. The singer had a fine voice, and he gave forth his chant as happily as though he were safe at home in England, with no cares or troubles in the world. With a sergeant, I set out to explore; as our boots clattered on the cobble-stones of the farmyard, there was a noise in the cellar, a head poked up in the entrance, and I was greeted with a cheery "Good morning, sir."

We crawled down the steps into the hovel to learn the singer's story. He was a man from another regiment, who had come down from his support dug-out to "nose around after a spud or two." The German sniper had "bagged" him in the ankle and he had crawled into the cellar—still with his sandbag of "spuds"—to wait until someone came by. "I 'adn't got nothing to do but wait," he concluded, "and if I'd got to wait, I might jest as well play at bein' a bloomin' canary as 'owl like a kid what's 'ad it put acrost 'im."

We got a little water from the creaky old pump and took off his "first field dressing" that he had wound anyhow round his leg. To my surprise—for he was so cheerful that I thought he had only a scratch—I found that his ankle was badly smashed, and that part of his boot and sock had been driven right into the wound.

"Yes, it did 'urt a bit when I tried to walk," he said, as I expressed surprise. "That's jest the best part of it. I don't care if it 'urts like 'ell, for it's sure to mean 'Blighty' and comfort for me."

And that is just the spirit of the hospitals—the joy of comfort and rest overbalances the pain and the operation. To think that there are still people who imagine that hospitals are of necessity sad and depressing! Why, even the children's wards of the London Hospital are not that, for, as you look down the rows of beds, you see surprise and happiness on the poor little pinched faces—surprise that everything is clean and white, and that they are lying between proper sheets; happiness that they are treated kindly, and that there are no harsh words....