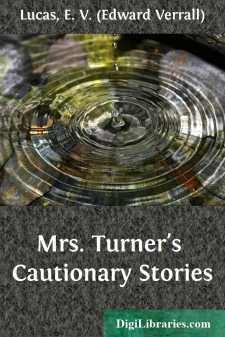 The sixty-nine Cautionary Stories that follow have been chosen from five books by Mrs. Elizabeth Turner, written for the pleasure and instruction of our little grandparents and great-grandparents. The books are The Daisy, The Cowslip, The Crocus, The Pink and Short Poems. Between the years 1810 and 1850 they were on the shelves of most nurseries, although now they are rarely to be met with. There was also The Rose, but from that nothing has been taken for these pages, nor are the original pictures again offered. Except for these pictures, a frequent change of title, and a few trifling alterations for grammar's sake, the pieces selected are now printed exactly as at first.

Mrs. Turner's belief, as stated by Master Robert in the verses called "Books better than Toys" in The Pink, was that the children of her day, when they had money to spend and wanted a real treat, could not choose anything more suitable than her Cautionary Stories. The piece runs:

'My dear, as Robert is so good,I'll give him what I said I would,Two shillings for himself to spend;He knows the shop of our good friend.' 'Yes, I know well the pretty shopWhere folks, you know, so often stopTo view the prints. The windows—look!—Are filled with toys and many a book. 'They have a thousand books and toysFor little girls and little boys;At toys, indeed, I love to look,But I prefer to buy a book. 'These two bright shillings, I supposeWill buy The Cowslip and The Rose;And when two more I get, I thinkI'll buy The Daisy and The Pink.'

In our own time Robert's opinion is not very widely shared: most of us would not care to give up a cannon or a doll in order that we might be cautioned; but Mrs. Turner is not the less an entertaining author because her volumes have fewer attractions for us than some of the things in a Christmas bazaar. She told her tales with such spirit: her verses are so straightforward, the rhymes come so pat at the end of the lines, and you may beat time with your foot and never be put out.

The stories Kitty likes so well,And often asks her aunt to tellAre all about good girls and boys.

Kitty's taste, like Robert's, is no longer general. The common view is that stories about bad children are more fun; and therefore I think you will be amused by these pages. Whether or not punishment always did follow the offences as surely and swiftly as Mrs. Turner declares, I am not prepared to say. If you are in any doubt you had better ask your parents.

Bad Boys and Good THE WINDOW-BREAKER Little Tom JonesWould often throw stones,And often he had a good warning;And now I will tellWhat Tommy befell,From his rudeness, one fine summer's morning. He was taking the airUpon Trinity Square,And, as usual, large stones he was jerking;Till at length a hard cinderWent plump through a windowWhere a party of ladies were working. Tom's aunt, when in town,Had left half a crownFor her nephew (her name was Miss Frazier),Which he thought to have spent,But now it all went(And it served him quite right) to the glazier....
Show more
Show less