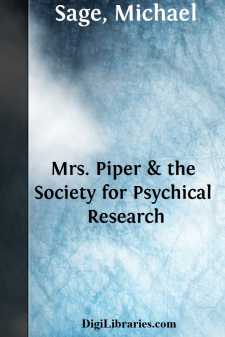 President of the Society for Psychical Research

One of the facts which by general consent in the present stage of psychological science require study is the nature, and if possible the cause, of a special lucidity, a sensitiveness of perception, or accessibility to ideas appearing to arrive through channels other than usual organs of sense, which is sometimes met with among simple people in a rudimentary form, and in a more developed form in certain exceptional individuals. This lucidity may perhaps be regarded as a modification or an exaggeration of the clearness of apprehension occasionally experienced by ordinary persons while immersed in a brown study, or while in the act of waking out of sleep, or when self-consciousness is for a time happily suspended.

In men of genius the phenomenon occurs in the most dignified form at present known to us, and with them also it accompanies a lapse of ordinary consciousness, at least to the extent that circumstances of time and place and daily life become insignificant and trivial, or even temporarily non-existent; but the notable thing is that a few persons, not of genius at all, are liable to an access of something not altogether dissimilar, and exhibit a kind of lucidity or clairvoyant perceptivity, which, though doubtless of a lower grade, is of a well-defined and readily-investigated type, during that state of complete lapse of consciousness known to us as a specific variety of trance.

Not that all trance patients are lucid, any more than all brown studies result in brilliant ideas; nor should it be claimed that some measure of lucidity, even of the ultra-normal kind now under consideration, cannot exist without complete bodily trance. The phenomenon called "automatic writing" is an instance to the contrary,—when a hand liberated from ordinary conscious control is found, automatically as it were, to be writing sentences, sometimes beyond the knowledge of the person to whom the hand belongs. Some approach to unconsciousness, however, either general or local, seems essential to the access of the state, and such conditions as ordinarily induce reverie or sleep are suitable for bringing it on; no one, for instance, would expect to experience it while urgently occupied in affairs. Whether it is desirable to give way to so unpractical an attitude, and to encourage the influx of ideas through non-sensory channels, is another question which need not now concern us. It suffices for us that the phenomenon exists, and that it occasionally though very rarely takes on so well marked and persistent a form as to lend itself to experimental investigation. It is true that in these cases nothing of exceptional and world-compelling merit is produced; the substance of the communication is often, though not always, commonplace, and the form sometimes grotesque. It is true also that a complete record of a conversation held under these circumstances—perhaps a full record of a commonplace conversation held under any circumstances—readily lends itself to cheap ridicule; nevertheless, the evidence of intimate knowledge thus displayed becomes often of extreme interest to the few persons for whom the disjointed utterances have a personal meaning, although to the outsider they must appear dull, unless he is of opinion that they help him to interpret the more obscure workings of the human mind, or unless he thinks it possible that the nature and meaning of inspiration in general may become better understood by a study of this, its lowest, but at the same time its most definite and controllable, form....