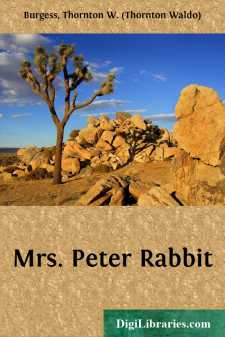 Peter Rabbit had lost his appetite. Now when Peter Rabbit loses his appetite, something is very wrong indeed with him. Peter has boasted that he can eat any time and all the time. In fact, the two things that Peter thinks most about are his stomach and satisfying his curiosity, and nearly all of the scrapes that Peter has gotten into have been because of those two things. So when Peter loses his appetite or his curiosity, there is surely something the matter with him.

Ever since Old Man Coyote had come to live on the Green Meadows, Peter had been afraid to go very far from the dear Old Briar-patch where he makes his home, and where he always feels safe. Now there wasn't any reason why he should go far from the dear Old Briar-patch. There was plenty to eat in it and all around it, for sweet clover grew almost up to the very edge of it, and you know Peter is very fond of sweet clover. So there was plenty for Peter to eat without running any risk of danger. With nothing to do but eat and sleep, Peter should have grown fat and contented. But he didn't.

Now that is just the way with a lot of people. The more they have and the less they have to worry about, the more discontented they become, and at last they are positively unhappy. There was little Danny Meadow Mouse, living out on the Green Meadows; he was happy all the livelong day, and yet he had no safe castle like the dear Old Briar-patch where he could always be safe. Every minute of every day Danny had to keep his eyes wide open and his wits working their very quickest, for any minute he was likely to be in danger. Old Man Coyote or Reddy Fox or Granny Fox or Digger the Badger or Mr. Blacksnake was likely to come creeping through the grass any time, and they are always hungry for a fat Meadow Mouse. And as if that weren't worry enough, Danny had to watch the sky, too, for Old Whitetail the Marsh Hawk, or his cousin Redtail, or Blacky the Crow, each of whom would be glad of a Meadow Mouse dinner. Yet in spite of all this, Danny was happy and never once lost his appetite.

But Peter Rabbit, with nothing to worry him so long as he stayed in theOld Briar-patch, couldn't eat and grew more and more unhappy.

Now, though he didn't know it, that was the very best thing he could do. It gave him something to think about. For two or three days he was very busy cutting new paths, and his appetite came back. But when he had made all the paths he wanted, and there was nothing else to do, he lost his appetite again. He just sat still all day long and moped and thought and thought and thought. The trouble with Peter Rabbit's thinking was that it was all about himself and how unhappy he was....