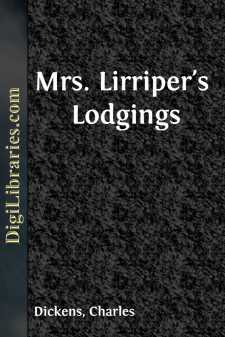 Whoever would begin to be worried with letting Lodgings that wasn’t a lone woman with a living to get is a thing inconceivable to me, my dear; excuse the familiarity, but it comes natural to me in my own little room, when wishing to open my mind to those that I can trust, and I should be truly thankful if they were all mankind, but such is not so, for have but a Furnished bill in the window and your watch on the mantelpiece, and farewell to it if you turn your back for but a second, however gentlemanly the manners; nor is being of your own sex any safeguard, as I have reason, in the form of sugar-tongs to know, for that lady (and a fine woman she was) got me to run for a glass of water, on the plea of going to be confined, which certainly turned out true, but it was in the Station-house.

Number Eighty-one Norfolk Street, Strand—situated midway between the City and St. James’s, and within five minutes’ walk of the principal places of public amusement—is my address.  I have rented this house many years, as the parish rate-books will testify; and I could wish my landlord was as alive to the fact as I am myself; but no, bless you, not a half a pound of paint to save his life, nor so much, my dear, as a tile upon the roof, though on your bended knees.

My dear, you never have found Number Eighty-one Norfolk Street Strand advertised in Bradshaw’s Railway Guide, and with the blessing of Heaven you never will or shall so find it.  Some there are who do not think it lowering themselves to make their names that cheap, and even going the lengths of a portrait of the house not like it with a blot in every window and a coach and four at the door, but what will suit Wozenham’s lower down on the other side of the way will not suit me, Miss Wozenham having her opinions and me having mine, though when it comes to systematic underbidding capable of being proved on oath in a court of justice and taking the form of “If Mrs. Lirriper names eighteen shillings a week, I name fifteen and six,” it then comes to a settlement between yourself and your conscience, supposing for the sake of argument your name to be Wozenham, which I am well aware it is not or my opinion of you would be greatly lowered, and as to airy bedrooms and a night-porter in constant attendance the less said the better, the bedrooms being stuffy and the porter stuff.

It is forty years ago since me and my poor Lirriper got married at St. Clement’s Danes, where I now have a sitting in a very pleasant pew with genteel company and my own hassock, and being partial to evening service not too crowded.  My poor Lirriper was a handsome figure of a man, with a beaming eye and a voice as mellow as a musical instrument made of honey and steel, but he had ever been a free liver being in the commercial travelling line and travelling what he called a limekiln road—“a dry road, Emma my dear,” my poor Lirriper says to me, “where I have to lay the dust with one drink or another all day long and half the night, and it wears me Emma”—and this led to his running through a good deal and might have run through the turnpike too when that dreadful horse that never would stand still for a single instant set off, but for its being night and the gate shut and consequently took his wheel, my poor Lirriper and the gig smashed to atoms and never spoke afterwards.  He was a handsome figure of a man, and a man with a jovial heart and a sweet temper; but if they had come up then they never could have given you the mellowness of his voice, and indeed I consider photographs wanting in mellowness as a general rule and making you look like a new-ploughed field....