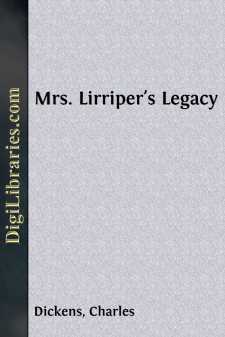 CHAPTER I—MRS. LIRRIPER RELATES HOW SHE WENT ON, AND WENT OVER

Ah!  It’s pleasant to drop into my own easy-chair my dear though a little palpitating what with trotting up-stairs and what with trotting down, and why kitchen stairs should all be corner stairs is for the builders to justify though I do not think they fully understand their trade and never did, else why the sameness and why not more conveniences and fewer draughts and likewise making a practice of laying the plaster on too thick I am well convinced which holds the damp, and as to chimney-pots putting them on by guess-work like hats at a party and no more knowing what their effect will be upon the smoke bless you than I do if so much, except that it will mostly be either to send it down your throat in a straight form or give it a twist before it goes there.  And what I says speaking as I find of those new metal chimneys all manner of shapes (there’s a row of ’em at Miss Wozenham’s lodging-house lower down on the other side of the way) is that they only work your smoke into artificial patterns for you before you swallow it and that I’d quite as soon swallow mine plain, the flavour being the same, not to mention the conceit of putting up signs on the top of your house to show the forms in which you take your smoke into your inside.

Being here before your eyes my dear in my own easy-chair in my own quiet room in my own Lodging-House Number Eighty-one Norfolk Street Strand London situated midway between the City and St. James’s—if anything is where it used to be with these hotels calling themselves Limited but called unlimited by Major Jackman rising up everywhere and rising up into flagstaffs where they can’t go any higher, but my mind of those monsters is give me a landlord’s or landlady’s wholesome face when I come off a journey and not a brass plate with an electrified number clicking out of it which it’s not in nature can be glad to see me and to which I don’t want to be hoisted like molasses at the Docks and left there telegraphing for help with the most ingenious instruments but quite in vain—being here my dear I have no call to mention that I am still in the Lodgings as a business hoping to die in the same and if agreeable to the clergy partly read over at Saint Clement’s Danes and concluded in Hatfield churchyard when lying once again by my poor Lirriper ashes to ashes and dust to dust.

Neither should I tell you any news my dear in telling you that the Major is still a fixture in the Parlours quite as much so as the roof of the house, and that Jemmy is of boys the best and brightest and has ever had kept from him the cruel story of his poor pretty young mother Mrs. Edson being deserted in the second floor and dying in my arms, fully believing that I am his born Gran and him an orphan, though what with engineering since he took a taste for it and him and the Major making Locomotives out of parasols broken iron pots and cotton-reels and them absolutely a getting off the line and falling over the table and injuring the passengers almost equal to the originals it really is quite wonderful.  And when I says to the Major, “Major can’t you by any means give us a communication with the guard?” the Major says quite huffy, “No madam it’s not to be done,” and when I says “Why not?” the Major says, “That is between us who are in the Railway Interest madam and our friend the Right Honourable Vice-President of the Board of Trade” and if you’ll believe me my dear the Major wrote to Jemmy at school to consult him on the answer I should have before I could get even that amount of unsatisfactoriness out of the man, the reason being that when we first began with the little model and the working signals beautiful and perfect (being in general as wrong as the real) and when I says laughing “What appointment am I to hold in this undertaking gentlemen?” Jemmy hugs me round the neck and tells me dancing, “You shall be the Public Gran” and consequently they put upon me just as much as ever they like and I sit a growling in my easy-chair....